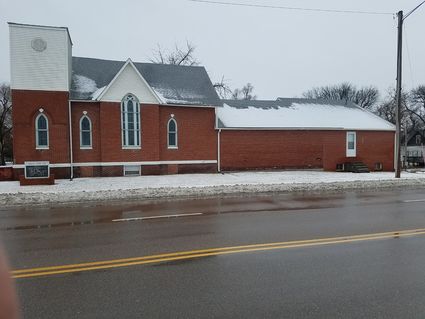 If a new community is built and people are to be reached, then a congregation must be established.

On Dec. 14, 1872, at the courthouse located in Jewell Center, Kansas, (now Mankato) a meeting was called to establish a congregation. Eleven voting members were present. John J. Abbie was elected foreman and Jacob Tonning as secretary. The group resolved to affiliate with the Norwegian Evangelical Lutheran Synod. A letter received said there would be a visit by Pastor G. Erdakh. He arrived for his visit in the spring of 1873.

When the congregation was organized, there was not a permanent church building. For the first 11 years, services were held in members’ homes. Many meetings were held at the Christopher Everson dugout and later his home and also the Helge Severson home.

On Sept. 22 1880, a deed made for an acre of land from John Lingo. It became the cemetery east of Mankato, formally Jewell Center. The cemetery west of Mankato was deeded July 16, 1883, by Christopher Everson. Two cemeteries for the church had nothing to do with separation and reorganization of the church. Instead, it was simply because members in the eastern part of the county wanted to be buried on the east side and others wanted to buried to the westside of Jewell Center.

In 1883 the congregation was busily engaged in building the first church located two miles west of Mankato on land deeded by Mons Thronson Records indicate a proposition by McCarthy was discussed to build a church for $ 300 including materials, The men of the congregation were to supply rock for the foundation. The size of the church was to be 30 by 22 by 12 foot high.

On April 30, 1910, a motion was made to build a new church in the city of Mankato. The vote was unanimous.

The lot was purchased for $550. A meeting was held on March 7, 1911, to decide whether or not to have Mont Green proceed that year with construction for $3,000. It was approved. In 1915 the young people's society installed electric lighting in the church.

On July 10, 1947, a house was moved from near Esbon and set on a prepared basement. It became the parsonage. 1n 1973, it was voted to eliminate the parsonage and extend the structure of the church with a 30 X 38 foot addition to the west. Construction was started in the summer and by December it was ready for Christmas services. The addition provided an enlarged seating area as the altar was moved to the east end of the building.

A pastor’s study, Sunday school rooms and an enlarged kitchen and dining area were in the basement.

In 1993 the congregation voted to repoint the bricks and extend the building to the south. The addition included a library a new pastor's study an overflow area, ramps both up and down an enlarged entrance and complete renovation of the worship area on the upper level. Three Sunday school rooms and restrooms were added in the basement.

In 110 years the church has survived many hardships such as the Depression and the dirty 30s. Overall, the congregation has maintained a strong unity and willingness to support the community.

References: literature from the Evangelical Lutheran Church of Mankato.