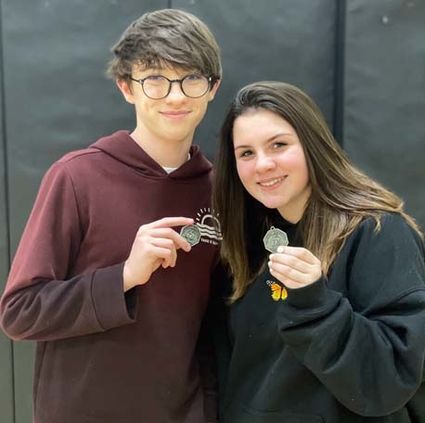 Members of the Superior High School speech team came home exhausted but thrilled with their first place trophy in speech competition at Beatrice this week. There they competed with students from seven other schools.

All members of the Superior team were double entered, something which helps the team earn lots of points when they do well. Luka Benjamin competes in extemporaneous speaking and Oral Interpretation of Drama. At most meets, each involves three presentations during the day before a different judge.

Both he and Tia Hunter compete in extemporaneous speaking. A contestant draws three topics and selects the one they consider most interesting. This happens three times during the day. After selecting a topic, the contestant has one hour to prepare a speech, which must be at least five minutes long. Topics are generally political in nature or a current event. A student cannot use the internet during their preparation period. However, they can use an extemp gene, which is an approximately 400,000-article catalog for documentation. Benjamin's topics this week were "Is the U.S. prepared for Corona virus?" "North Korea's Christmas present" and "Amazon's fires - How will they affect the election of a president?" Hunter's topics were "Will Scotland leave the UK Brexit?" "Who suffers most from the Bernie Sanders – Elizabeth Warren spat? " and "Why should Iran provide compensation for shooting down a Ukranian jet?"

Extemporaneous speakers are allowed to use one small note card during their presentation.

Each presentation is called a round. At Beatrice, scores from the three rounds were averaged to determine placings.

Students pick a script for the Oral Interpretation of Drama (OID) competition. No props or costumes are permitted. Character changes are made with changes of voice and demeanor. Superior students are doing "Oz." It is a comic take off of the "Wizard of Oz" and as they work on it from week to week they make changes. Each member of the OID team will have the scrip available to them at waist level in a small black notebook with 5x7 inch sheets of paper. The type size is small – probably nine point Helvetica.

The team's OID presentation is made at least twice during the competition and a third time if they make it to finals. All OID competitors must be present and ready for all the OID presentations unless they are double entered.

Each school is required to provide a judge for every three students entered into the competition. "That was really hard," Amelia Benjamin, coach, said. "There are not many people comfortable judging speech who are also willing to give up their Saturdays."

Jasmine Gravitt, a Superior graduate, currently residing in Grand Island, and Gary Bartholameau, also from Grand Island, represent Superior as judges this year, along with Amelia.

Since Amelia serves as a judge, she cannot be present for each student's presentation to provide encouragement and support. Thus, the team decided to have captains and co-captains this year. Jayden Simons and Lacey Langer are team captains. Both are experienced speech competitors and are seniors. Co-captains are Luka Benjamin and Cassidy Frey.

"They give advise and help the younger team members," Amelia said. "Speaking can be really scary. Lots of people are scared to speak. So, the captains try to make the competitor comfortable. Plus, captains are responsible for making sure everyone can find where they are supposed to be and to be on time. They will have a map of the school and help with navigation."

Madaline Humphries, a senior, is the team's student manager. At Beatrice, she made sure everyone got lunch and also makes sure someone from Superior is there to watch each member of the team compete.

"Micah Janicek, a freshmen, also helps out," Amelia said. "That was when I have to judge, everyone has the help, encouragement and support they need."

Cassidy Benjamin often contributes to the team as a substitute. Saturday, Ravon Holland, was ill and could not travel with the team. Cassidy stepped in and filled Holland's spot on the OID team. Cassidy also presented a persuasive speech entitled, "High School – not the best years of your life."

In persuasive speaking, she is not allowed to use visuals. She is considering using the same topic and using much of the same script to compete in entertainment. There she would use no script, but could use a visual.

"I am getting comfortable speaking," Cassidy said. "It is very helpful in school and is a way to express how I feel and my personality. It gives me a place. Plus, speech competition has given me friends from other schools. It is so nice to go to speech performances and find 'kindred spirits."

"That's the way I feel about the other coaches too," Amelia added. "It is a community. People are there for you and are supportive of you. You hear students from other schools cheer for you."

Saturday, March 14, the Superior speech team will be performing in their respective events for the Superior community. Luka and Cassidy want the community to attend. It will be just three days before district competition.