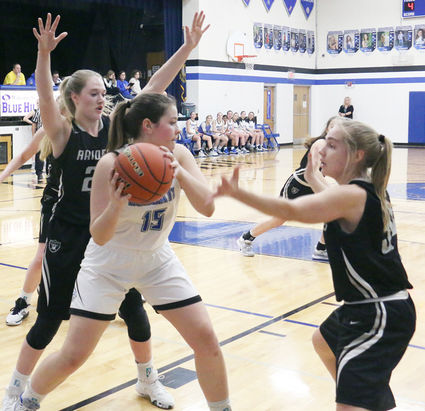 The Lawrence-Nelson girls basketball team continued their magical winning streak 19-0 after winning their opening game against Deshler in the Twin Valley Conference Tournament at Nelson Monday.

The Raiders rolled the Blue Hill Bobcats, 51-37, at Blue Hill last Tuesday. They sailed past Diller-Odell, 54-36, at Odell, last Thursday. They passed their toughest test of the season, Friday, when they downed the then 12-2 Silver Lake Mustangs, 49-40, at Roseland. They downed Deshler, 39-29, at Nelson, Monday.

Statistics for the Deshler game were unavailable at press time.

The Raiders take on the Shelton Bulldogs today (Thursday) at Kenesaw at 6 p.m. The championship and consolation games will be played Saturday at Kenesaw. The team visits Harvard Tuesday for a game with the Cardinals.