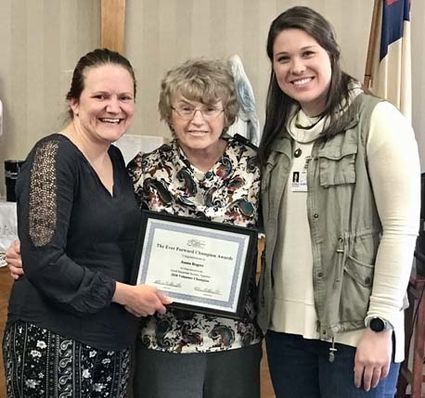 Friday afternoon before a staff meeting, the Good Samaritan Society's, Superior staff members, presented four of their peers, co-workers and friends with 2020 Ever Forward champion awards. The awards are given for four areas: caregiver, employee, volunteer and leader. Thirty people were nominated for the awards. Staff members voted for those who have shown over the year Good Samaritan Society's values and gone the extra mile in their work.

Michelle Powers, chairman of the Ever Forward committee and a nurse aide and medication aide at the facility, introduced Vera Tippin as the Employee Champion. She works in both the housekeeping and dietary departments. "Vera shows a positive attidude even on her bad days," was one of the comments describing Vera. She is compassionate to all those around her. 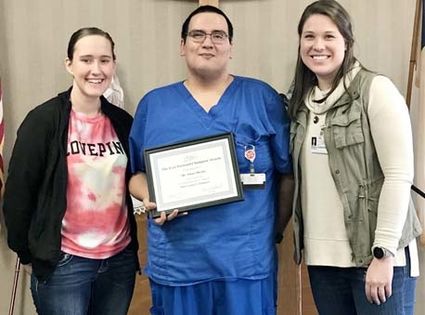 The Caregiver Champion was "JR" Eliseo Mireles, a nurse aide at the facility. Staff and residents are appreciative of the kindness and attention JR gives to those he works with. He adapts well to change and helps others even when he is off the clock.

Jessi Hamilton, activities assistant, presented Brenda Hoskins, activities director, with the Leader Champion award. Those who work with Brenda said she is a good boss. She is compassionate about her work. She demonstrates perseverance and is always willing to help.

Joanne Rogers received the Volunteer Champion award. She is the beautician for the residents. Joanne is known for her patience, loyalty to the residents and putting the needs of others before herself.

The Ever Forward committee consists of facility employees. The goal of the committee is to engage the staff in activities at the facility and in the community to nourish the workplace atmosphere.