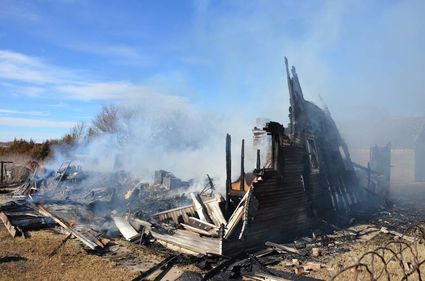 What remains of a home that caught fire on Thursday morning. The home was located along HWY 4 just a few miles east of Lawrence The farm was purchased by the Karmazin family in the 1980's and had been the residence of Jerry Karmazin for the last five years.

Thursday at 8:56 a.m. the Nuckolls County Sheriff's office received two 911 calls reports for a house fire at 3119 Highway 4, just a few miles east of Lawrence. Lawrence Volunteer Fire Department was dispatched at 8:59 a.m. At approximately 9:10 a.m., Nelson Fire was called out to assist and bring water. Thirteen volunteers from Lawrence and six from Nelson answered the call.

Lawrence had the ambulance on the scene, along with every vehicle at their disposal. Nelson brought their water wagon, pumper and equipment vehicle. It took about two and a half hours to extinguish the blaze. Th...