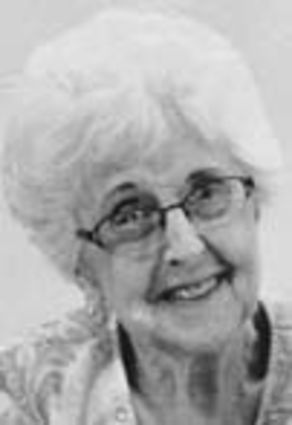 America lost another member of The Greatest Generation when Elaine Ruth (Johannes) Madsen died Feb. 7, 2020 at Lincoln's Fallbrook Assisted Living after a six month stay. Elaine had spent the vast majority of her 94 years in Superior, Neb. She was born August 2, 1925, to William Henry and Ida Marie (Lindhorst) Johannes in rural Nuckolls County, Neb.

Elaine (Jo) was baptized August 16, 1925, at St. Mark's Lutheran Church in Ruskin, Neb., but confirmed at Centennial Lutheran Church in Superior where her father was one of the founders. She began her elementary country schooling near Nelson through the second grade. When her parents purchased farmland near Webber, Kan., and Lovewell Lake, her education continued there. When Webber High School closed in 1941, Elaine transferred to Mankato High School and graduated in 1942 at the age of 16. After one year working at the Jewell County Courthouse, Elaine attended Strickler's Business College in Salina. After completing her course work, she was hired by the Santa Fe Railroad before heading to Needles, Calif., during World War II where work was more plentiful.

Although a rarity in the 1950s and 60s, Elaine was a working mother, eventually spending the majority of her career as a legal secretary for Downing & Downing in Superior. When the elder Downing died, it became Downing & Alexander with a second office in Kearney. Elaine spent 28 1/2 years working for Robert, David and Randy. Even after retirement, Elaine stayed busy by working at Menke's Pharmacy into her 80s. With Howard's death in 1996, Elaine stayed in her own home until re-locating to Superior's Good Samaritan Center's Wilde Ridge until her health started to fail in 2019.

Elaine was preceded in death by her husband, Howard, in 1996, parents, and sisters and brothers-in-law; Esther and Clarence Blocker and Gladys and Keith Johnson, as well as sister-in-law Clara Johannes; brother, William (Bill) Johannes of Council Bluffs, Iowa is the sole surviving sibling.

Elaine's funeral is scheduled for 10 a.m. Friday, Feb. 14, at Superior's Centennial Lutheran Church with viewing at Williams Funeral Home the prior evening from 5 to 7. Burial will follow the service with interment in Superior's Evergreen Cemetery.

Memorials are suggested to be earmarked for Centennial Lutheran Church or Wilde Ridge, both of Superior.