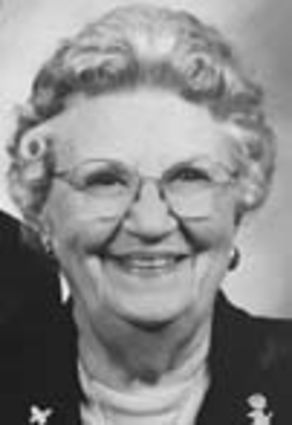 Hilda was baptized by Pastor Wagner and confirmed by Pastor F. Schardt at St. Paul Lutheran Church, Byron. She received her education in Republic County Kansas.

She was united in marriage to Raymond Marquart on Nov. 24, 1942, by Pastor Weltner at St. Paul Lutheran Church and shortly after, she became a member of St. Peter Lutheran Church. They were blessed with four sons: Ronald, Gerald, Bradley and Leon.

In 1985, Hilda and Raymond moved to Superior, where she enjoyed volunteering at the Brodstone Memorial Hospital and Vestey Center. She was a member of the Byron Extension Club for 25 years. Hilda enjoyed holiday get-togethers with the family making her favorites; potato salad, apple pie and peppernuts. She created many beautiful quilts and afghans, liked to work in the garden, canned fruits and vegetables and painted ceramics. Hilda was an active member of the church. Some of her favorite activities were teaching Sunday school, singing in choir and tying quilts.

Raymond and Hilda enjoyed traveling, playing cards and going to dances. They were proud to say they had visited 49 of the 50 states together.

Condolences may be sent to the family at wmsfh.com. Williams Funeral Home of Superior was in charge of the arrangements.