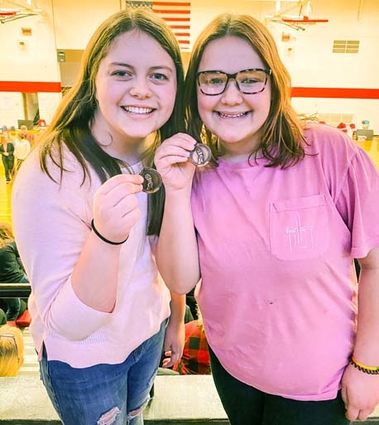 Speech and public speaking. Most people shy away from having to speak in front of groups. Yet in high school, students have the opportunity to compete in unique speech events. They travel to competitions in the league and some competitors even make it to state competition just like sports teams.

Kaylee Flaata, is a member of Superior High School's speech team. She competes in two areas, serious prose and in a duet. She said, "I find speech fun and have always liked the arts." At meets she enjoys seeing the talents of her teammates and others at competitions.

At the beginning of speech season, she was given two weeks to choose selections for her two areas of competition. For the serious prose area, she chose Bitter Disappointment, a monologue by Bradley Walton which is both lighthearted and serious. It is about friends. One ends up with liver failure. The prose is 10 minutes in length with actions and different dialogue. She usually practices at school three times a week. During her performance, she can hold a script if she needs to but she has it memorized. She can improvise if needed.

Raven Holland is Kaylee's duet partner. At the beginning of speech season, the two girls chose to do a duet together. They picked three or four selections to read through together. They commented it was hard to choose a duet because the publishing company only sends the first half of each selection. They didn't know the endings. They chose the comedy Anti-Depressants, by Jeff Weisman, because they thought the selection fit their personalities the best. One character is happy-go-lucky while the other is more serious. They meet in the office of a therapist. While waiting for their appointments, they strike up a conversation and build a friendship.

The girls practice one to two times a week or more. They have made major changes to the duet since they first performed it. In fact, they have a new ending from what they started with at the first of the season. Duet acting does not allow them to use a script, but they do act out parts.

Raven enjoys participating in speech. It pushes her out of her comfort zone. She likes going to meets and watching the talents of others.

Jayden Simmons participates in poetry and oral interpretation of drama (OID). This is Jayden's second year competing in poetry. The poetry area interested her since the topics are more general and expressive. She has different characters in her eight minute selection so she uses jestures and dialogue to distinguish them. Her memorized poetry entry is built around the selection Not Unscathed, Just Reclaimed by Caroline Kildonas and Amanda Hedges. Jayden said, "I chose this selection because I can relate to it. The main character is naive."

The Superior High speech team goes to several meets. Each meet they improve and tweak their performance. Kaylee and Raven intend to compete in speech next year too. Jayden has already joined a college speech team for next year. These three students have found excitement in competing in speech.