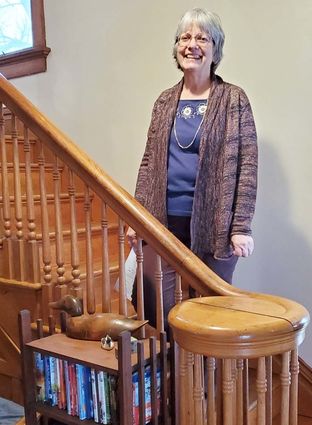 Participants on the Jewell Sesquicentennial Historical Home Tour walked up this oak staircase at the home of Chuck and Judy Gibson. Above, Judy stands ready to lead the way.

More than 100 people attended the first event of Jewell's Sesquicentennial celebration. The historical home tour visited five homes and drove by other properties owned and lived in by people intertwined in Jewell's history.

Butch and Annette Baxa Burks entertained in the Jewell Community Center as groups waited their turn to tour. The duo sang a variety of songs to an appreciative crowd. Chocolate fountains along with cheese and crackers were available.

The first of the five homes to be toured now belongs to Jason and Jessie Eilert. Located at 518 Broadway, many remember it as "Dr. Plowman's House." He was not the first owner but lived in it for close to 50 years. It was originally built in before 1910 by Edgar Young.

Judy Gibson hosted the second stop of the tour in the home she and her husband, Chuck, have owned since 1986. The home was built in 1907 at 618 Broadway by W.C. Palmer. The Palmer Family had the house for more than 60 years. On the tour was a granddaughter of the Palmers', Paula Ellis of Manhattan. Also, touring the home was Shirley Sprenger Wessling of Beloit. Her grandfather, Ed Sprenger, had owned the home in the 1970s.

Third on the tour was a home built by a Mr. Hicks in 1907. Hicks was from a wealthy English family. The contractor for the construction of the home was Charles Durkee. When completed, it had 300 feet of iron fencing and 2,100 square feet of oak flooring. Located at 418 Delaware it is now owned by Cindy Traump.

Damon and Shelby Bohnert hosted the fourth home on the tour. Their home is located at 216 North Sheridan and was purchased just last year. After remodeling, they moved in last October. The home was built by William and Sarah Musser. The Musser family was a well-known banking family in Jewell and still known for the Musser Fund which has helped area youth with funds for higher education for generations.

The fifth and final stop was at 505 North Sheridan. This home was built by Oren Seaton in 1909. "Seaton Hill" in the backyard was the playground for the nearby school. Seaton's son, Roy, was the dean of the School of Engineering for many years at Kansas State College (now Kansas State University.) Seaton Hall on the KSU campus is named for him. The home is now owned by LeRoy Bourbon.

Other places were noted on the tour. The location of Fort Jewell at the corner of Delaware and Belle was pointed out. This fort was built to protect the settlers from the threat of Cheyenne attack in May of 1870. The sod walls were seven-foot tall and four-foot thick. The first well in Jewell was dug inside the fort.

What is thought to possibly be the oldest home in Jewell is an 1884 home now owned by Keith Hastings. This home, located at 503 Delaware, was built by J.S. Fisher. A newspaper account describes the home as 20 years old in 1904, thus the 1884 building date.

Another home, currently owned by Bob and Pat Berry Willmeth, has always been in the same family. The home was moved to 418 North Columbus by Fred and Addie Bartsch in 1912. The Bartsch's are the grandparents of Pat Berry Willmeth. The next owners were Pat's parents, A.L. and Helen Bartsch Berry, who bought the home in 1945. The Berrys were married in the living room of the home in 1916. Sixty-eight years ago, Bob Willmeth and Pat Berry were married in the same living room.

"Jewell – We Have A Story To Tell"! The Sesquicentennial Historical Home Tour was just the start of telling that story. The next installment of the story will be at 10:30a.m. at the Community Memorial worship service at the Trinity United Methodist Church on Sunday May 24. #JoinUsInJewell!