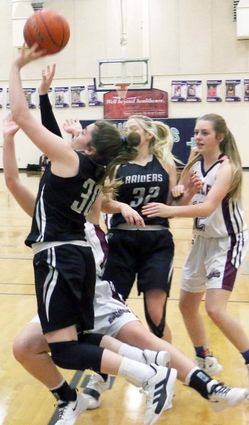 The Lawrence-Nelson girls basketball team plowed their way through the D2-6 sub-district field at Grand Island Central Catholic last Tuesday and Thursday. Rebounding from their loss to Superior which saw their undefeated season go up in smoke, the Raiders had something to prove. They were the number two seed. They handed Nebraska Christian a 48-36 loss last Tuesday to advance to the finals game. Their they took on number one seed Bruning-Davenport-Shickley. It was close, 59-54, but the Raiders prevailed to advance to the district finals.