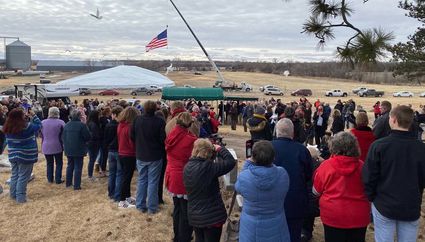 Seventy-eight years after surviving the attack on Pearl Harbor, Donald Stratton's body was returned this week to Red Cloud for the last time. Hundreds of people gathered at the Red Cloud Cemetery Monday to pay their final respects to 97-year-old World War II veteran.

Monday morning the body of an American hero was laid to rest in the Red Cloud Cemetery and hundreds of people gathered to pay their final respects to the community's native son.

American flags lined the entrance to the cemetery while a crane hoisted a flag above the gravesite. Patriot Guard members held flags along the road as the vehicle carrying Donald Stratton's body approached the cemetery.

Stratton, a 1940 graduate of Red Cloud High School, was one of the few men on board the battleship Arizona who survived when the ship was sunk by the Japanese during the Pearl Harbor attack on Dec...