L-N girls ousted from state in first round 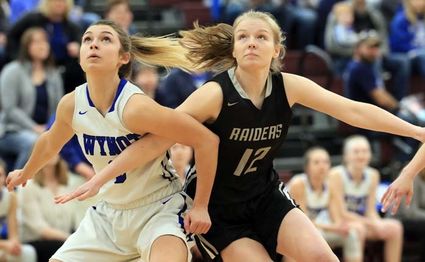 Allison Miller (12), was not only the leading scorer for Lawrence-Nelson at the Nebraska State Girls Basketball Tournament, she also contributed all around the court. In this picture she blocks out for a possible rebound.

The Wynot Blue Devils bedeviled the Lawrence-Nelson girls basketball team. The defending D-2 champions sent the Raiders home with a 48-49 win at Lincoln's North Star High School last Thursday. Wynot finished the tournament with another D-2 championship. The Raiders entered the tournament as the number fives seed while Wynot was seeded fourth.

The two teams played back and forth with the score over the first two quarters with Wynot holding a 21-18 lead at the half. Wynot began to hit their three-point shots over the next two quarters. This would prove to be the difference to the game's ou...