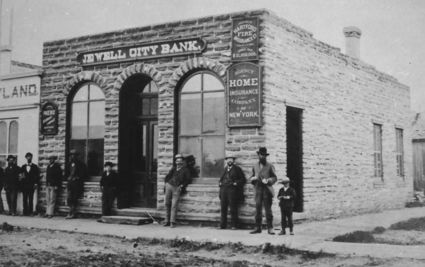 This historic photo of the Jewell City Bank was provided by Linda Woerner. The banks was closed after J. H. Schaeffer embezzled funds from the bank. The bank is featured in the Jewell Sesquicentennial logo. The little stone building is located at 200 Delaware, south of Maag Park.

Located at 200 Delaware, south of Jewell's Maag Park, is a little stone building with a rich history.

John Calvin Postlewaite, for whom Calvin township is named, saw the need for a bank and set about to establish the first bank in Jewell County on this site. He had been in business for 10 years and was noted as a first-class bookkeeper and accountant. He was said to be honest, industrious, and had as his motto, "punctuality and dispatch." Construction of the rustic appearing stone structure commenced in February, 1880, and by April, it was completed and the safe had arrived. Inside the...