Christians around the world will celebrate Palm Sunday on this coming Sunday, April 5. (Or on April 12 in Eastern Orthodox or Russian Orthodox congregations.) It is often observed with children carrying palm branches down the aisles of churches but will be observed differently this year. Services online, via Facebook, Zoom and other media will tell the centuries old story. 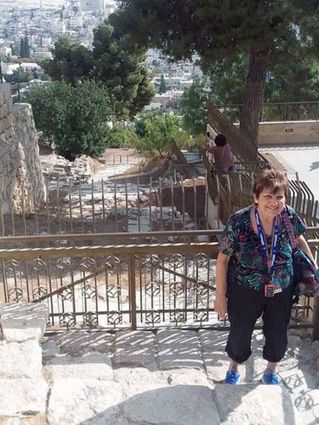 Mary Ann Wess, stands on a first century road from Gethsemane into Jerusalem. Jesus would have walked on this road. The one he followed from Bethphage to Jerusalem on his triumphant entry into the city would have been narrow like this one.

The story of Palm Sunday, as recorded in the Gospels, tells of the day Jesus rode triumphantly into Jerusalem. The story begins as Jesus and the disciples approached Jerusalem. Nearing the city, he sent two disciples ahead to a village. There they were to find a colt for him to ride.

The prophet Zechariah had prophesied that the coming king would come "riding on a donkey, a colt, the foal of a donkey." When the disciples returned with the donkey, some put their robes on his back for Jesus to sit on. Jesus rode across the Kidron Valley and into the what was then and still is now, the Holy City.

As he rode along, some put their robes down on the road and others put down palm branches. From ancient times in Jewish history, conquerors and kings were greeted with palms put on the road before them and palms waved in the air by the crowds.

The crowds that greeted Jesus were greeting him as a conqueror. They were cheering "Hosanna!" The word means, "save, rescue or savior." They also chanted "Blessed is he who comes in the name of the Lord!" or "Hosanna in the highest!"

A truly triumphant entry but there would be more, much more to the story.