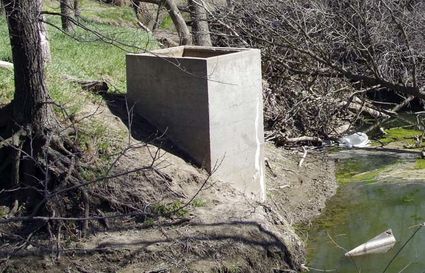 What is this rectangular concrete structure pictured near the edge of Lost Creek ?

If I was a youngster playing along the creek, it would look pretty inviting. I’m sure I would look over the edge, curious to know what I might see.

I remember being with other boys exploring a pasture while our parents attended a picnic held in a nearby farmer’s grove. We found the remains of two hand dug wells that probably had been part of an abandoned farmstead. Other than the wells we didn’t see any evidence of a farmstead ever having been there, but if there wasn’t a farmstead, why would someone have dug two wells in that location? Both appeared to have been laid up with brick. We looked down the wells and were surprised to see they were filled almost to the surface with mud and rotting boards. The boards may have once been used to cover the open wells. I suspect the wells went dry and the people who had called that hillside home, moved away. If the wells hadn’t been filled, I suspect we youngsters would have looked for a rock or other heavy object to drop down the shaft. After dropping the rock, we would have listened for a splash and tried to guess how far it was to water.

Though I didn’t take this picture, I recognized the pictured concrete structure as similar structures can be found along the Courtland Canal, near where I grew up. They are located near the low points of irrigation district canal structures I grew up calling siphons. The pictured one is near where the Superior Canal goes under Lost Creek. From a point near the American Legion Hall to about Louden Street, the Courtland Canal runs underground. For most of that way the canal’s tube is under Superior’s Ninth Street.

I’m told the pictured structure was described by the engineer as an air lock.

When the Courtland Canal (the one I am most familiar with) was built more than 65 years ago, the structures had wooden lids. I assume the Superior Canal which was built at the same time, had similar lids. The lids were substantial enough that I was never removed one and looked down the shaft. If I could have removed it, I was afraid to do so for I expected the shaft had some kind of stopper or cork that kept the water from gushing out. I didn’t want to cause the cork to pop out and be blamed for draining the canal. I also knew to stay away from the canal siphons.

I remember hearing men tell about logs and even horses that were sucked into the siphons. According to the stories I heard while listening to men talk at my father’s gasoline station, when the logs emerged at the other end of the siphon, the bark had been stripped off. Horses were not only drown but nearly skinned when sucked through a siphon.

If youngsters fell down one of the shafts, I expected they would die.

As a youngster, I was told irrigation district personnel opened the airlocks when the canal was allowed to dry up each fall. The opening allowed the water trapped in the siphon to return to the Republican River.

After hearing that story, a friend and I devised a plan. We were certain large catfish lived in those siphons and when opened they would be swept downstream to the river.

We got some old fence posts and hog wire. Working in the creek below the siphon, we set the posts in the sandy creek bed, stretched the wire across the creek channel to act like a seine and started to dream about the large catfish we would catch when they were flushed out of siphon.

We checked the upper end of the siphon on our way home from school expecting to see an indication that the water had been drained that day. Several days passed with no indication. When we went to check on our trap, we found the posts set in the creek bottom sand had washed out and our trap had gone downstream with the water flow.

We were so disappointed over missing the big catch that year, we never reset the trap.

It has now been decades since I looked at an airlock device. Perhaps the boards have all rotted off and the devices are now open invitations for youngsters and animals.