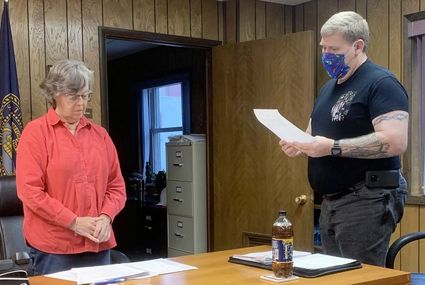 Monday evening, at the opening of the Superior City Council meeting, Sonia Schmidt resigned as mayor and announced Chris Peterson, as council president, would replace her as mayor. Above, Schmidt (left) watches as Peterson reads the oath of office and is sworn in a mayor.

As expected leadership of the City of Superior government changed hands Monday night.

While the meeting was conducted virtually, Sonia Schmidt, Chris Peterson and Jan Diehl, city clerk, were among those meeting in the city council chamber.

Mayor Schmidt followed the normal procedure for opening the meeting and moved straight to the regular agenda. The first item to be considered was the submission of her resignation.

Mayor Schmidt said the operation of the city council during her term of administration had been an example of democracy in action. While members had their disagreements, th...