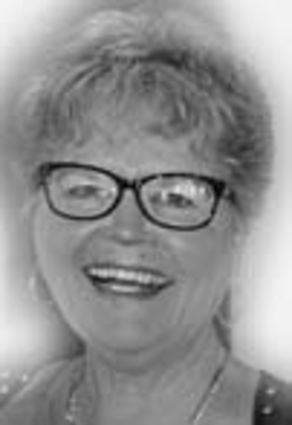 Evelyn Carol (Bogenhagen) Thompson, 77, was born March 30, 1943 to LaVara Marie (Bolen) and Harlon, Lee Bogenhagen of Wallace, Kan. She died May 5, at her home near Guide Rock, Neb.

Evelyn attended Harrison Flats Grade School until eighth grade. At that point, Evelyn went on to attend Wallace County Community High School in Sharon Springs and graduated in May, 1961.

Evelyn attended Kansas State University in Manhattan, Kan., where she majored in home economics and met Kenneth Thompson, whom she was drawn to for his car and sense of humor. They fell in love and Kenneth proposed to her on the top of Manhattan Hill.

On June 3, 1963, they were united in marriage at the United Methodist Church in Sharon Springs. They resided in Manhattan until Kenneth graduated from K-State with his doctor of veterinary medicine degree in 1965. Along the way, Evelyn helped by typing his class notes.

Kenneth and Evelyn purchased the Guide Rock Veterinary Clinic and operated the practice until selling it in 1981. Evelyn and Kenneth were blessed with two children, Darren Todd in 1966 and Michelle Lynn in 1967.

At Guide Rock, Evelyn was involved in many endeavors. She co-led many 4-H Home Economic groups like the Snippy Snappers where she taught countless girls to sew including later many granddaughters. All have many fond stories of sewing, ripping, crying, yelling and laughing together over the sewing machine. Evelyn also enjoyed sewing clothes for her children as they grew, and, later, enjoyed making beautiful gifts and quilts with her sister, Linda Vester.

Evelyn was extremely involved in Eastern Star where she once served In Grand Chapter as Grand Esther. She continued Eastern Star service in many capacities throughout her life.

Evelyn also was extremely active in the United Methodist Church of Guide Rock where she coordinated serving for many funerals, played piano for several years, and graced many weddings and funerals alike with her beautiful voice and talent.

Dr. Kenneth LeRoy Thompson died Oct. 22, 2016. Later, Evelyn met and committed her life to Dale Keith Putnam from Lincoln on Sept.1, 2019, in Guide Rock, where they continued to live out her days on the family farm where Evelyn took great pride in her yard, flowers, and the many birds that enjoyed her filled feeders.

Evelyn was especially blessed with many close friends whom she would often go to dinners with and laugh until their sides hurt.

A strong, loving, friend, wife, mother, grandmother and great-grandmother; her most precious memories were laughing and telling stories with her family and hosting holidays with all the fixings.

Preceding her in death were her parents and stepdad, Ivan Smith. Her husband, Kenneth Thompson, and a daughter-in-law, Jessica Thompson.

A memorial service will be held at a later date.