They and many others in the county have a story that begins with the same two persons – Jacob K. and Sarah Peacock Loomis. The two came early, 1871, to homestead in Jewell County. The pioneer couple is buried in the Ionia Cemetery.

The cemetery is a familiar place to their great, great, great, great grandsons, Jarrett and Grant Arasmith. For the last four years Jarrett, and now Grant, having been mowing and caring for the cemetery. It is the final resting place for many of the now eight generations of the Jacob K. Loomis family.

The patriarch of the family, Jacob K. Loomis, most often claimed Connecticut as his state of birth. Researchers feel he was born there about 1806. Loomis began moving west sometime before his marriage to New Yorker, Sarah Peacock. She was born in New York in 1813 and the belief is they married there in 1831. Their first three children, Joanna, Hester and Andrew were born in New York in 1834, 1836 and 1838 respectively.

Their daughter, Hester Loomis Jaynes, and her family were also there. Daughter, Joanna Loomis McDaniel, and her family as well as their son, William H. Loomis, and his family, remained in Iowa. A son, Andrew, had died in Mississippi in 1862 serving with the 14th Regiment of the Iowa Infantry in the Civil War.

In 1871, Jacob and Sarah Loomis made another move west. At a time when life expectancy was around 40 years, Jacob in his mid-60s and Sarah in her late-50s, made the decision to homestead. Their move was to Ionia Township, Jewell County, Kansas.

The couple must have played a strong and vital role in the family. By 1880, all five of their children and their families had joined them in Jewell County. Not all stayed. The Wallace and Emily McDonald Loomis family eventually settled in Oklahoma around 1890. Timothy and Hester Loomis Jaynes joined them in Oklahoma but were in Sumner County, Kansas by 1910.

But Jacob and Sarah, William Henry, John F. and Joanna Loomis McDaniel and their families remained Jewell Countians. William Henry had married Josephine Taylor in Iowa in 1870. John F. was also married. He and Mary Anna Huddleston were married in Iowa in 1876. Joanna's husband was Perry McDaniel. She had married him in 1866 in Indiana after the death of her first husband, John Stedman.

By 1886, there were four Loomis homesteads. Jacob, his sons, William Henry and John F., plus his grandson, Andrew J. (the oldest child of John F.) all claimed their homesteads, proved up on them and were granted patents to their land. All the homesteaders were farmers.

Land records show that Jacob received his patent in August of 1877. A news item from 1882, noted his homestead was on "Ash Creek" and he had "40 acres under cultivation, all planted to corn." He likely lived on the homestead with Sarah until 1884 when he sold the land to Robert H. Davis. A newspaper item tells that Jacob and Sarah traveled to Jackson County, Kansas in 1887. At the time, they had a son, Wallace, and a daughter, Hester, along with their families living there.

Jacob died on Feb. 3, 1889. His oldest child, daughter Joanna McDaniel, had died just a few days before. After his death Sarah lived with her son, William Henry. She died on Nov. 18, 1903. Jacob and Sarah are buried side-by-side in the Ionia Cemetery.

After mentioning two of their descendants, is here we leave Jacob and Sarah's son, John F., his wife, Mary Anna Huddleston Loomis, and their family. Their oldest son was Andrew Jackson Loomis, He was also an early homesteader in Jewell County. Their son, Charles F. Loomis, is the great- grandfather of Jewell resident, Kenny Garst.

The couple had seven other children and over two dozen grandchildren. Mary Anna died in 1903 and John F. in 1916. They, like many others in the Loomis family, are buried in the Ionia Cemetery.

William Henry Loomis was granted his land patent on March 1, 1879. In July of 1882, Loomis ceased his farming operation, sold his property and began a series of other business ventures. Hardware, implements, "groceries and cigars," a hotel, general merchandise, and at one point, a "chicken ranch" were all part of his endeavors in Ionia. In 1909, the Jewell County Monitor noted his Ionia store had the "largest floor space under one roof in Jewell County."

Generally successful and a well-respected businessman by all accounts, Loomis was described as one of the most popular businessmen in Jewell County in the Sept. 6, 1906 edition of the Jewell County Monitor. But there were two fires which were damaging to his endeavors.

One was in 1910 and destroyed his business and the Ionia Hotel. It was noted in a 1906 article that Loomis has run the Ionia Hotel for "nearly a score of years." In 1920, a large fire burned three businesses in Ionia including the Ionia Mercantile Company which was owned by Loomis.

Each time, he regrouped and began another business. Through the years he was involved with a hardware store with S. E. Sill and then with the Ionia Mercantile Company. Another general merchandising business was W. H. Loomis and Co.

Josephine Taylor Loomis died in 1926. William Henry kept working in his various businesses until he was 80 years old. He died in 1934 and is buried next to his wife in the Ionia Cemetery.

Those familiar with Jewell area names, may have noted William and Josephine's daughter, Albertine Loomis Kent. She was the mother of Ansel Kent, the grandmother of Bette Kent Willmeth and the great-grandmother of Marsha Willmeth Bartsch of Jewell.

Oscar Eugene Loomis also married a Kent, Emma Kent. He is the father of Dasibel Loomis McIntyre, the mother of Steve McIntyre and Marsha McIntyre Slate both of Jewell.

William Henry and Josephine's son who impacted the most people in Jewell, is Clarence William Loomis. As many may know, he married Margaret Slattery and their children were Sherman Loomis, Carl Loomis, Mannie Loomis and Clarence Loomis.

Sherman Loomis was the banker of the family. He was, for several years, a well-respected banker in the Randall National Bank. He retired to Massillon, Ohio. He and his wife, Vera Alcorn Loomis are buried in the Ionia Cemetery.

Carl Loomis was the generation's farmer . After graduating with the Class of 1927 from Ionia High School, he taught in a country school for a year then attended Topeka Business College. After college he returned to the farm near Ionia and was known to be happiest when talking about crops. He and his wife, Lucille Gish Loomis, are buried in the Athens Cemetery.

Clarence Loomis, well known Mankato businessman was also a WWII veteran. He was the owner of Loomis Building and Electric. Married to Alethia Rannebeck Loomis, they had two children. Sharon Murray of Kansas City and Marvin Loomis of Mankato.

Mannie Loomis, also a farmer in his generation, was born in Ionia like the rest of the family. He moved to Jewell in 1964. Married to Opal Broyles their children were Kathleen Loomis Little of Jewell, the late Karen Loomis Moyer and Bill Loomis, Jewell. Their descendants are well represented in Jewell.

Karen was married to the late Wendell Moyer. Two of their daughters, Becky Moyer Cockroft and Deb Moyer Bohnert, live in Jewell. Jessie Simmelink Eilert, Damon Bohnert and Darica Bohnert Hagler are grandchildren. Great-grandchildren, Jensen and Jada Eilert, are two of the seventh generation of the family to live in Jewell County.

Bill and Becky Oplinger Loomis have two sons, Matt of Ionia and Adam of Jewell. Both are involved in farming as was Bill. Bill is probably as well known for his business, Jewell Implement. That business is now operated by daughter Billi and her husband, Jason Arasmith. They are the parents of the Jarrett and Grant Arasmith mentioned earlier. Jarrett and Grant are also part of Jewell County's seventh generation of the Loomis family.

Another group of the Loomis seventh generation is Ayden, Ashlyn and Avery Loomis. They are the children of Adam and Amber Bartsch Loomis. Adam farms west of Jewell.

Kathleen Loomis Little, Jewell, remembers her grandparents, Clarence and Margaret Slattery Loomis. She is the oldest living cousin in the family. Her grandparents farmed for many years in the Ionia area before moving to Jewell. They lived in a couple of homes in Jewell, one being on Bryam Street. 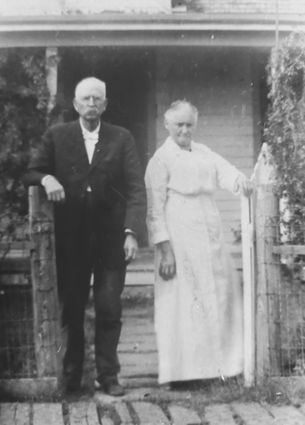 William Henry and Josephine Taylor Loomis were homesteaders in Ionia Township in 1871. William was a long-time Ionia businessman. They are the great-grandparents of Bill Loomis and Kathleen Loomis Little, both of Jewell.

Kathleen stayed with them various times. The last time was when she was working as a waitress at the Stapleton Cafe during Old Settlers. This was in the early 1950s when Old Settlers was a big event, with rides and attractions all around the park. She would stay with her grandparents instead of driving home late at night.

The descendants of Jacob and Sarah Peacock Loomis now number more than 800. There are many more unnamed than named in this article. In this, Jewell's Sesquicentennial year, this article seeks to honor a family who has lived in Jewell County for seven generations. It especially seeks to honor those with ties to Jewell.

Special thanks to Kimberly Loomis of Mankato for her work on the Loomis Family Tree in Ancestry.com. Also, thanks to Ray Terry for his printed genealogy books and to Becky Oplinger Loomis for loaning them and their picture to me. Those resources as well as Ancestry.com and Newspapers.com were used for this article.