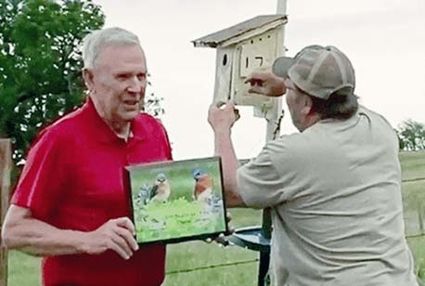 Darrell Jensen, Cadams, was honored by Bluebird Across Nebraska (BAN) at the 2020 National Conference at Kearney March 14.

Darrell Jensen, Cadams, was honored by Bluebirds Across Nebraska (BAN) at the 2020 National Conference at Kearney on March 14. He was presented the "Bluebirder of the Year Award."

Jensen was nominated by his son, Brent, who wrote, "Six years ago at the age of 78, Darrell took over the role as bluebirder from his brother, Loren, when he was no longer able to check on his bluebirds. Over the past six years, Darrel has taken great pride in checking his 99 birdhouses weekly. Last year, he successfully fledged 488 bluebirds. It was a tough year as he usually averages more than 500."