With the combination of the COVID stay-at-home recommendation and the National Weather Service category 3 severe storm forecast for Sunday afternoon, Rita and I stayed pretty close to home.

Since the latest cornavirus arrived in this area, Rita and I have not been physically attending Sunday morning worship services. Weather permitting, we have participated in Sunday morning parking lot services and planned to do so again this week, but with all of Sunday's thunder, lightning and rain, we changed our minds and stayed home. But that didn't mean we forgot about worshiping. For the prior Sundays when we didn't attend via the parking lot, we have watched videos and services broadcast over the internet, read scripture and discussed what we read and saw. Our private service generally has taken from two to three hours on Sunday mornings. I will confess, I haven't worn my Sunday bib and tucker to our home service.

With the storms in the forecast for this week, I made sure our portable devices that did not need to be connected to the electrical distribution system were charged and ready. It has long been our practice to disconnect sensitive electrical devices whenever there is lightning in the area. We have had lightning explode a connected surge suppressor and burn out computer components that were not disconnected before the storm arrived.

With this week's storm, internet service on Sunday was off more than on. Thus we couldn't watch broadcast services and we didn't want to connect a device and play a video. For our worship time, we read and discussed prior Sunday School lessons.

Later in the day, I was supposed to be sorting and organizing picture files. But I got sidetracked when I found the negatives Robert Mikkelsen took of the 1979 Father's Day Car Parade held in Superior. Unlike properly processed black and white pictures which may last for centuries, today's digital and those made with color film have a much shorter life expectancy. Though only 41 years old, the car parade negatives are fading and discoloring. 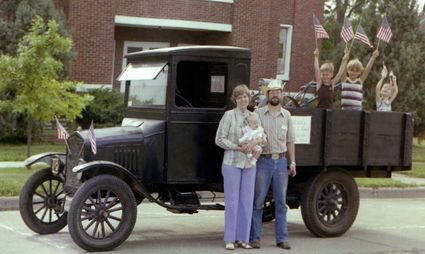 Marlan and Susan Watson are pictured with their Model T truck in front of the former First Baptist Church on Commercial Street. The truck was an entry in the 1979 Father's Day parade sponsored by the Superior Chamber of Commerce. Can you find four children in the picture?

Since it was Father's Day, I decided it would be appropriate to post a slide show of those photos on our website.

In the process of trying to upload the slide show, I somehow sent it to the National Weather Service's Facebook page.

Since the time when I served as the weather bureau's temporary Superior observer, I have occasionally sent the Hastings office weather reports and observations and they have included me on their weather briefings.

Since receiving my car show report, the weather service has contacted me confirming its receipt. Fortunately, the guys in Hastings saw the humor in the goof and said not to worry about it.

I haven't checked but I suspect the car show's life on the weather service site was of short duration. After learning of the mistake, I correctly posted it. If a reader of this column wants to see the slide show, it is now available on either of our websites. The sites may be reached at theleaderpaper.com or superiorne.com addresses.