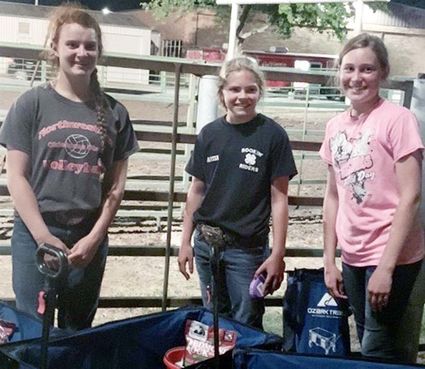 High Point winners at the Guide Rock Rockin' G Horse Show, Saturday, were (left) Alyssa Johnson, 11 and under class; Sydney Bartels, 15 to 18 class; Sadie Rempe 15 to 18. and Lucy Geweke (not pictured), 19 and over class.

Saturday was the 20th anniversary for Guide Rock's Rockin' G annual open horse show with 98 participants. Judging was Lydia Smith Jundra of Clarkson. Age groups were 11 and under, 12 to 14, 15 to 18 and 19 and over with nine classes. Competitors were from Kansas and Nebraska. Some of the towns included Courtland, Minden, Juniata, Kearney, Lincoln and Grand Island.

High Point winners were awarded in each class: 11 and under class, Alyssa Johnson; 12 to 14, Sydney Bartels; 15 to 18, Sadie Remple; and 19 and over, Lucy Geweke. The committee also gave useful prizes to horse owners.