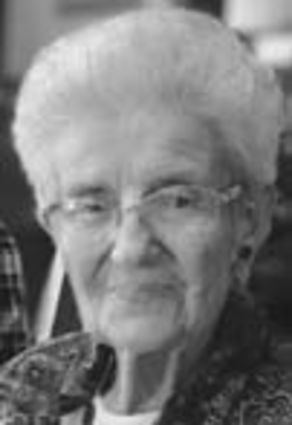 Loretta Anna Alma (Heitmann) Schardt, 96, the oldest of five children, was born to Louis and Meta (Bohl- ing) Heitmann on Oct. 7, 1923, near Hardy.

Loretta filled her home with love for her family, and her love for the outdoors was evident in her flowers and gardening. Her love of God was seen in her humble and strong faith. She died at her rural Byron home June 19. Loretta was baptized Oct. 21, 1923, at St. Peter Lutheran Church in rural Byron by Pastor Seybold. Her baptism verse was Mark 16:16. She was confirmed at the same church on April 10, 1938, by Pastor Hoefer. Her confirmation verse was Romans 5:1.

On Oct. 21, 1945, she was married to Egbert Schardt at St. Peter Lutheran Church in rural Byron by Pastor Hoefer. This union was blessed with three children, Lyle, Lynnis and Ryan. Egbert and Loretta enjoyed 65 years of marriage and she continued to live on the family farm until her death.

She was a life-long member of St. Peter Lutheran Church, participated in Bible study, taught Sunday school, member of Mary-Martha Circle, was office holder of WELCA and sent birthday cards to nursing homes and assisted living facilities in Deshler and Hebron. Loretta was also a member of Byron Busy Bees Extension Club, and she enjoyed sewing blankets for church projects. She was an avid cook and baker and had joy sharing her goodies with her family. Loretta enjoyed bowling, traveling, round and square dancing and attending grand- children's activities.

Condolences may be left at Price-Urbauer-Ahrendts Funeral Home. Price Funeral Home, Hebron, was in charge of arrangements.