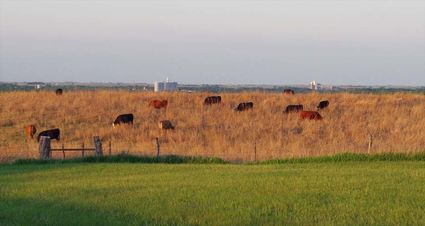 The arrow points to the same structure in both pictures. Above, the normally crisp, clean air lets one see the structures Superior - especially the elevators: Holcim, Aurora Cooperative and Agrex. Sunday, dust from the Sahara Desert in Africa blanketed the area, creating diminishing visibility. The pictures were taken within 50 yards of one another from the hill south of Superior known as Blauvelt's Hill.

A few days ago a friend living out-of-state said "I love sand but I prefer it on the beach."

I didn't understand the comment when it was made but I do now for it referred to the Saharan dust plume that reached the United States in late June.

We got to experience the edge of that plume Sunday. While it apparently was much worse on the gulf coast, I certainly didn't enjoy the sand storm it brought to our area on Sunday.

I don't want a repeat, but weather forecasters indicate another plume of Saharan dust is expected to reach the southern parts of the United States this week. Lower conce...