Berry paid $1.50 a ton for limestone to be hauled from the quarries south of Randall to the building site. When it arrived, it was dressed on location by James A Ashbaugh. Ashbaugh received $3,462 for his masonry work.

The building has been on the National Historic Register since May 12, 1995. Located on the southwest corner of the intersection of Center and Madison streets in Mankato, the building faces the east. Currently owned by the Jewell County Historical Society (JCHS), the limestone jail is part of the society's museum. Deb Garmen is the museum curator and Jack Alcorn is the JCHS president.

Several remember being in the old jail – though not to serve time. Deb Alcorn Taddiken of Clifton recalls staying with her friend, Donna Clegg King, at the jail. The Jewell County sheriff and family lived in the front part, the living quarters, of the jail. If you visited the sheriff or their family, you visited the jail.

Taddiken also has heard her father, Hooley Alcorn, of Mankato, tell of visiting a prisoner (in for DUI) in the jail. At the time, he was just locked in the cell to visit the man. However, the sheriff and family left to go out to eat, forgetting Hooley and leaving him still locked up with the prisoner.

Gary Keeler remembers playing in empty cells when his granddad, Roy Keeler, was sheriff. Betty Schremmer of Hoisington remembers living there as does Karen Morris Ross of Mankato. When Ross lived there, 1949 to 1953, her mother cooked for the prisoners.

Thanks to Dane G. Hansen and Jewell County Community Development grants, the historic 120-year-old building has a new roof. The grants, written by the JCHS, are much appreciated as the roof protects and enhances the community's historical building. 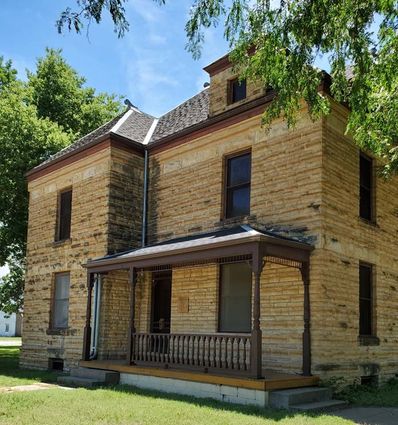