The current world-wide pandemic has changed the way many businesses operate including the M&M Fireworks stand at Mankato.

Mankato city ordinances ban the operation of fireworks stands within the city limits, but that hasn't kept Mankato residents from having access to fireworks.

Over the years stands have been located near the city boundaries, including ones at Huntsinger Conoco, Ken's Body Works and the Hughes home.

Since 2004 a brother and sister, Shanon Meier and Angela Murray, have teamed up with their families to operate M&M Fireworks at the Meier home which is located in an off the beaten path location south of Highway 36, just beyond the corporate limits of Mankato but the location hasn't kept customers away. Their fireworks story started in Clifton where Angela operated a stand before moving to Mankato. She opened that stand for the first time in 1994.

In their 26 years in the fireworks business, there has never been a year like this one.

The challenges began early when their supplier began having trouble getting merchandise.

For the Chinese, the production of fireworks has been a homebased business. There are markets where private citizens and distributors negotiate contracts to produce products that meet the buyer's standard. After the products are manufactured, they are gathered and shipped to the United States where importers distribute to wholesalers and who supply the stand operators. 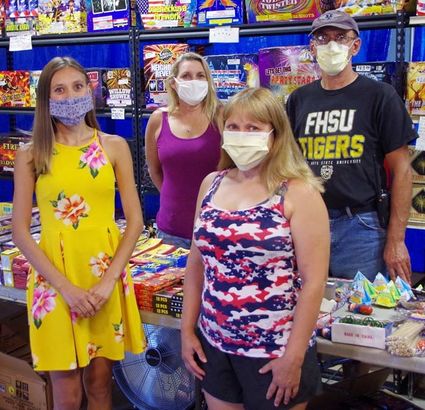 M&M Fireworks stand is a family affair. Operating the business Saturday evening were (back, from left) Angela Murray, Shannon Meier, (front) Sarena Meier and Joni Meier. Brian Murray is not pictured. Angela and Shannon are siblings. Celebrating Independence Day with lots of fanfair is a long-standing family tradition.

Generally, a stand receives an order in one shipment but that wasn't the case this year. Fireworks for the M&M stand arrived at different times and some of the desired items are still not available.

With fewer community shows, the national demand for consumer fireworks is at an all-time high with more families planning their own show either individually or in groups.

And that is a case for the Meier family. Angela said July 4th has long been an important date on the family calendar. The family gathers for a big barbecue and private fireworks show. The family may not shoot all the leftovers but they make sure not everything is sold. Some of the stand's merchandise is saved for the family gathering.

The stand is located in the Meier family home and is air conditioned for the shoppers' comfort. This year hand sanitizer is available and masks were encourged even before the governor's order requiring masks be worn was issued.

With both Angela and Shannon working in health care, they realize the importance of taking precautions.