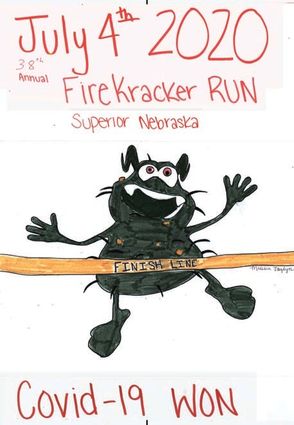 Maleka Marshall designed a T-shirt for this this's FireKracker Run. T- shirt orders are now being taken at Superior Family Medical Center. Just because the race wasn't run, there is no reason you can't have the T-shirt.

Saturday should have been the 38th running of the Superior FireKracker Run but members of the Superior Jogging Club, the race sponsor, chose not to hold the race because of the health concerns it would have created.

In past years, the race has drawn hundreds of people to City Park. It wasn't unusual to have about 300 participants and probably that many or more watchers. Had any of those been COVID-19 spreaders, the air would have been full of the contagious virus.

But just because the race was not being run in its traditional form didn't mean loyal particpants spent the day in their easy...