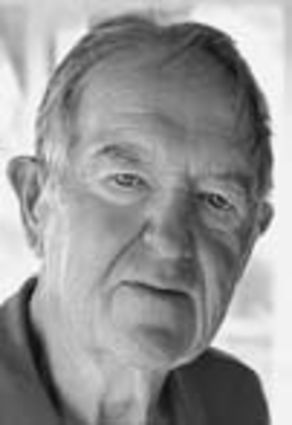 As a young child, Victor loved to play on the floor at the back door, and listen to his father talk to veterinary clients who came to the house... thus the start of his path of becoming a veterinarian just like his own father. He grew up riding down country roads with his father on innumerable veterinary calls, wearing holes in the passenger seat with his feet standing to see all that was going on.

Victor enrolled at Kansas State University in 1958 to fulfill his lifelong dream of being a veterinarian. He was a college track athlete. After a bout of both rheumatic fever and mononucleosis causing a slight pause in his trajectory, he graduated from the College of Veterinary Medicine in 1966 along with the "fearless foursome", and many dear veterinary friends he still held close to this day.

Victor found the love of his life when a cute cheerleader from Kackley arrived at his door with her injured dog. He then proceeded to make house calls to check on the animal daily. Once he found the number to call, 2866, Carlene accepted the date, and off they went to the drive in theater. This began a life of love together filled with adventures and fun times. Victor and Carlene spent a lot of time waterskiing on Lovewell Lake, and even some irrigation canals. Carlene was studying at Fort Hays State University, but was quickly convinced to attend Kansas State University by Victor.There they spent many nights dancing and enjoying hot fudge sundaes. Victor started his racing career early on the streets of Manhattan to get Carlene back by curfew to the Kappa Delta sorority house. Once his studies were completed, Victor graduated on June 5th,and then married the love of his life, Carlene on the following Sunday, June 12th, 1966. To this union five children were born. Sarah Elizabeth Hurtig (deceased), Natalie Ann Hurtig, Edward Carl Hurtig, Melissa Mae Boisseau and Victor Carl Hurtig, III "Trey".

Victor invested and devoted his life into his career, community and family.  The Hurtig family made their lifelong home in Courtland area. Together, "Doc" and "Vic, Jr" practiced veterinary medicine together, establishing The Hurtig Veterinary Clinic as a staple of the community from 1926 to 2014. Victor serviced both large and small animals in the area. He also helped train numerous interns, welcoming and hosting them into their home and mentored them as future vets.  Practicing veterinary medicine for 48 years, Victor was a member of the Kansas Veterinary Medical Association, served on the Board of Examiners, and was a lifetime member of the American Veterinary Medical Association.

Victor will be remembered as a visionary and pillar of the community. His tremendous investments of his time and his resources began in the 70s when he and other community leaders donated the land for, and subsequently created, the Courtland Swimming Pool, Mini Park, tennis courts, and basketball courts. Victor also helped to reconstruct the Courtland Baseball Field and crow's nest. Victor's initiatives were pivotal in helping to renovate the Courtland Community Center, the city hall, and the library. Victor also was instrumental in establishing the Sunflower Manor Senior Citizen Center. Serving as president of the Pride Club and on the Courtland Arts Council for many years, Victor took pride in serving leadership positions in the community. Victor's leadership extended to the Ada Lutheran Church Council, on the School Board as president and member for many years, and was a 49 year member of the Elks Lodge.

Victor's spare time included numerous hobbies mostly centered around his family. He and his wife became certified licensed pilots in 1971/1972. As members of the Belleville Flying Club, Victor and Carlene routinely took all five children in their airplane for many midwest adventures.  Victor's need for speed then translated to the racetrack in the late 80s where he decoratively raced IMCA modified, mini stock and cruisers on dirt tracks across Kansas and Nebraska.

A passion for both water and snow skiing was a skill Victor personally enjoyed and in turn instilled in his children and all nine grandchildren. He loved boating at Lovewell Lake. On the slopes, his family fondly recalls Victor leisurely skiing backwards down many a ski slope with a video camera in hand and his signature cowboy hat.  Every Christmas for well over the last decade, Victor gathered his entire family on the ski slopes for family fun and memories. Other hobbies he shared with his family included raising cattle, golf, carpentry, gardening, and landscaping. His family cherished his artistic side as well enjoying his photography, cartooning and wood carving.

A devoted Kansas State fan, Victor started a tailgating tradition with his family in the early 80s in the gravel parking lot outside of the football stadium that spans three generations, and continues on today with his grandchildren. He was founder and president of the Beaver Creek Social Club, and with his bride a lifetime member of the Kansas State Alumni Association.

One of Victor's most epic, endearing, and unique qualities was that of his storytelling. He was a man of humor, and will be remembered for incredible stories ranging from pulling calves to UFOs, flying his plane amidst unpredictable Kansas weather and many wild Vegas adventures.

In his retirement, Victor enjoyed KSU football, Las Vegas, taxidermy, gardening, caring for the backyard oasis that he created to entertain family and friends and traveling to see grandchilden's activities that he was so very proud of.

He was preceded in death by his parents; sisters, Carol Hurtig Copening and Virginia Hurtig Henson; and daughter, Sarah Elizabeth Hurtig.

The family is grieving privately and held an intimate, private funeral service on the family farm, with a burial immediately following at Ada Lutheran Cemetary. Public visitation at Tibbets-Fischer Funeral Home for those to pay their respects was held on Friday, July 3, at 12 to 8 p.m., and Saturday, July 4, from 9 a.m. to 5 p.m. A proper celebration of life honoring Victor is being planned for a later date.

In lieu of flowers, the family requests memorials to the Dr. Victor C. Hurtig, Jr. Courtland Community Development Fund or the Courtland Arts Center, and may be sent in care of the funeral home.

Tibbetts-Fischer Funeral Home of Belleville assisted the Hurtig family with these arrangements, http://www.tibbettsfischerfuneralhome.com.