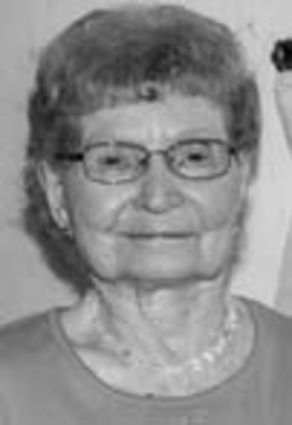 Evelyn Mae Sweet, Superior, was born on July 16, 1919, to Ole and Anna (Jensen) Jeppesen on a farm near Guide Rock, Nebraska. She was only five days shy of celebrating 101 years with her family when she died with dignity and grace on July 11, 2020, surrounded by her loved ones.

Evelyn was baptized and confirmed at the Danish Lutheran Church in Abdal, Nebraska. Her early school years were in a little country school near Bostwick followed by two years of high school in Guide Rock before graduating from Superior High School in 1937.

In the summer of 1941, she met a handsome farmer, Everett Sweet. They were married on June 20, 1944, and moved to his family farm south of Hardy. They were blessed with two children, a son, Harold and daughter, Ann. Evelyn was a devoted wife, mother, grandmother and great- grandmother.

Although she claimed no special talents, she had many. She was a culinary expert, known for her cinnamon rolls, pies and fried chicken. She was a master gardener who grew enough vegetables to share with neighbors and still fill the shelves of her cellar with home canned food to last the winter. Her horticulture skills were evident every summer when her flower garden bloomed for all to see. Animal husbandry talents were also evident as she raised chickens, horses, pigs and fed more bucket calves than could be counted. She was a cleaning expert with everything in its place, not a speck of dust anywhere and floors so shiny you could see yourself. She could whip up a dress or make a costume with her Singer sewing machine in no time at all. She honed her nursing skills while caring for Everett for many years after he became disabled from multiple sclerosis. However, her best talent was nurturing and loving her family and friends.

Evelyn was a member of the Hardy Union Church where she taught Sunday School and enjoyed being part of the Women's Christian Union. She also enjoyed her time in Jewell Social Circle as well as Danish Brotherhood.

Her funeral was held at 1 p.m., Tuesday at the Union Church in Hardy. Pastor Marilyn Sweet officiated. Burial was in the Rose Mound Cemetery, south of Hardy. Visitation was held from 11 a.m. to 7 p.m., Monday with the family present to greet callers from 5 to 7 p.m.

Memorials in lieu of flowers may be given to the Superior Auditorium. Condolences may be sent to the family at wmsfh.com. Williams Funeral Home of Superior, was in charge of the arrangements.