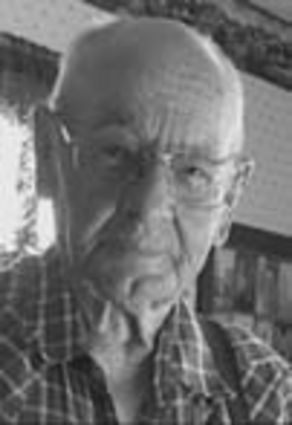 Kenny was baptized as a child at the Presbyterian Church in Nelson and confirmed into the Catholic faith in Superior, in 1950, prior to his marriage to Shirley Carlson on July 12. To this union, three daughters were born: Cynthia Kaye, Carla Jean and Christy Ann.

Kenny graduated from Hardy High School with the Class of 1947. Two of his favorite teen memories were playing in the state Junior Legion baseball tournament and working for Jerome Kohl as part of his auto mechanics class. Kenny’s adult life was spent in the Hardy area.

Following graduation, Kenny worked on the road crew that built Highway 8 from Superior to Hardy. He began his farming career in 1950. In 1959, Kenny purchased the farm that he called home. After renting the Blaine Lyne farm for 69 years, Kenny had the opportunity to purchase the land across the highway from his home place in 2019. Kenny’s fellow area farmers demonstrated their respect for a lifetime of work by not bidding against him at auction time. Kenny cleared and leveled the land in order to erect his first-ever central pivot irrigation system. That was Kenny’s greatest farming accomplishment.

In 1962, Kenny supplemented his farm income by becoming a truck driver. He spent time on the road for Superior Transfer, Richard Meyer, Jones Land and Cattle Co and Wray Wehrman. In 1975, Kenny sold land to Farmland to build a hog-buying station. That led to the purchase of his first semi and trailer. Eventually that business evolved into Jensby Trucking Inc. Kenny added reefers in order to haul cheese for Mid-America Dairymen from its Superior plant, as well as cattle trailers. At the height of hauling, Kenny had 24 rigs on the road. Personally, he drove more than a million miles while training and supervising his drivers. His favorite trip was to Rosalia, Kansas, located in the Flint Hills where friendships grew beyond the trucking industry. In 2020, Kenny celebrated the trucking line’s 45th year in operation, his shining accomplishment in business.

Kenny touched many lives throughout his farming and trucking career. When Kenny’s cancer diagnosis was made known this spring, many of his former workers returned to their boss to express their appreciation for his guidance in molding their adult work ethics. That touched Kenny beyond words.

Kenny was still active and feeding his own cattle until a few months before his death, demonstrating his own work ethics. Kenny was proud of the farming-trucking legacy he left behind and will be remembered for his great dry sense of humor. He loved his family in his own way, with a twinkle in his eye instead of the spoken word.

Kenny was preceded in death by his parents; wife, Shirley, on Aug. 24, 2011; brothers, Robert (and sister-in-law Dorothy), and Roy Leon and brother-in-law, Orville Meyer.

He is survived by sister, Donna Meyer, of Ruskin; sister-in-law, LaGreta Jensby of Atkinson; nieces, nephews and their families. Kenny’s constant companion, a Morki named Missy, will be lost without her master.

After a severe farm accident in December, 2012, Kenny credited health workers at Brodstone Memorial Hospital in Superior, Bryan Medical Center in Lincoln and the American Red Cross for saving his life so he wanted to honor those through his memorials, as well as St. Joseph’s Catholic Church.

His graveside funeral was held at 3 p.m., Saturday, Aug. 1, 2020, from the Evergreen Cemetery in Superior, with Pastor Nathan Sherrill officiating.

Music was recordings “Daddy You Are My Hero,” “Take My Hand Precious Lord,” and “Grandpa Told Me So.”