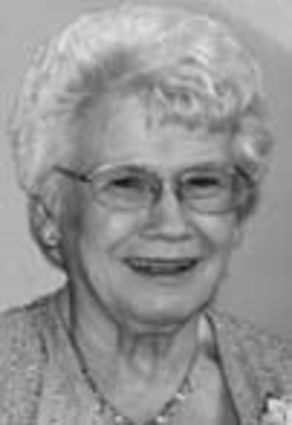 Amaryllis Geraldine (Peterson) Eckles, was born to Enos and Gladys (Frye) Mazour on Oct. 21, 1933, on the family farm near Spring Ranch, Neb. She died Saturday, Aug. 8, 2020, at Bryan West Medical Center in Lincoln at the age of 86.

Gerry, as she was known to family and friends, was baptized and confirmed at St. Martins (Loucky) Catholic Church west of Deweese. She graduated from Fairfield High School in 1951. She married Levonn (Pete) Peterson on July 3, 1951, at St. Martins. They enjoyed 49 years of marriage together in the village of Oak, where they raised their five children, until Levonn’s death in 2001.

Gerry was a longtime member of Bethany Lutheran Church in Ruskin, where she belonged to the Women’s Circle, including several leadership roles, and taught Sunday School. She belonged to the American Legion Auxiliary and Danish Brotherhood in Ruskin and served as a den mother for the Cub Scouts in Oak. She spent numerous nights camping on the Little Blue River while supporting her family’s love for fishing. She could fry catfish like no one else and supplemented the fish and wild game her family brought home with fresh or canned produce from her large garden.

She and Levonn enjoyed bowling, square dancing and visiting and playing cards with family and friends. Their greatest joy was attending their children and grandchildren’s sporting games, church and school activities. Gerry had a kind heart that she opened to young and old alike. She loved her nieces and nephews, having her grandchildren over to stay, and spent many years caring for the elderly in Oak so they could stay in their homes. Her children and grandchildren remember her singing as she worked and memorizing Bible scripture written out and taped to the window as she washed the dishes. Later in life, she enjoyed outings with friends in the Red Hats and Red Rubies women’s clubs in Nelson.

Gerry found love again and was married to Phillip Eckles on Aug. 22, 2009, at Sacred Heart Catholic Church in Nelson. They enjoyed each other’s company at their home in Nelson, cooking, relaxing on the porch, watching sports and doing chores together. She enjoyed preparing the fish Phill brought home.

They attended Sacred Heart Church in Nelson, where Gerry was a member of the Altar Society, and St. Joseph’s Church in Superior. Gerry experienced much joy in their combined families, especially participating in all the holiday and birthday celebrations.

They moved to a Kingswood Court Assisted Living apartment in Superior on November, 2019, and soon adapted to a new routine since they were doing it together.

If planning to attend Gerry’s visitation or funeral service, please wear a mask, if possible.

Memorials are suggested to go to the Palliative Care Department at Bryan Medical Center, which gave such attentive care to Gerry the last week of her life, or Sacred Heart Catholic Church Altar Society, Nelson.

Condolences may be given online at https://www.pricefuneralhomes.com/obituary/geraldine-peterson-eckles. The funeral service will be posted on Gerry’s page for viewing online at the above address for family and friends who cannot attend in person. Her family hopes to plan an informal celebration of life in the future for those who cannot gather now.

Megrue-Price Funeral Home, Superior, is in care of the arrangements.