And it was over! 75 years ago and six years of fighting - WWII 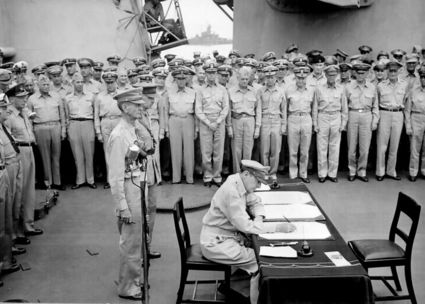 On September 2, 1945, General Douglas MacArthur, representing the Allied Powers, signed the surrender documents ending WWII. The surrender occurred on the deck of the battleship the USS Missouri in Tokyo Bay. The USS Missouri, "Mighty Mo," was the last battleship to be built and the last to be decommissioned. She now serves as a memorial in Pearl Harbor.

Seventy-five years ago, after six years of fighting – four and a half years of world-wide fighting and United States involvement, the ravages of World War II were finally coming to an end. The cessation of combat in the European Theater came on May 8, 1945. Celebrations erupted all over Europe and in the United States.

Long time Jewell resident, Norman Greene, recalls hearing about the end of the war "on the radio" and remembers a celebration in the Jewell Park to observe the end of the fighting in Europe. Celebrations were in order. But WWII was a two front war and the war in the Paci...