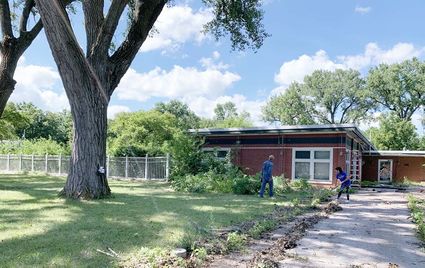 Dustin Cassel and his daughter, Addi, along with the rest of the Cassel family have been hard at work to get what was once the Good Samaritan building located in Nelson looking nice. The family recently purchased the building in hopes of turning it into a childcare facility.

Dustin and Nicole Cassel have purchased the former Good Samaritan center in Nelson. The elderly care facilty closed 11 years ago and Nelson's residents have been wondering if would ever be home to anything more than rot and decay. The Good Samaritan group sold the facility at auction to a Beatrice area investor. Under the investor's ownership the facility was repeatedly embroiled in tax disputes and the facility has twice gone to sheriff's sale.

Nicole Cassel recently discuss her plans for the facility with a Nuckolls County newspaper reporter. She plans to use the facility originally...