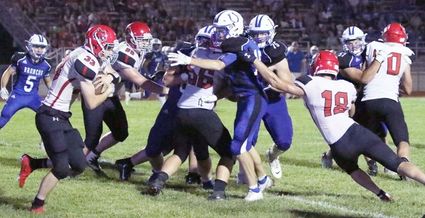 Payton Christiancy (88), Jordan Brown (56), Clayton Morris (18) and Seth Schnakenberg (70) block for Elijah Hausinkvelt (33) as he looks for a hole in the Centennial defense line during Friday's game.

Centennial scored first on a one yard run and extra point kick in the first quarter. Neither team scored in the second quarter. In the third quarter, Dane Miller scored for Superior on a 53-yard run. Their two-point conversion attempt failed, so the quarter ended 6-7 in Centennial's favor. In the fourth quarter, Centennial scored on a 26-yard pass and extra point kick. The game ended with the score SHS-6, CHS-1...