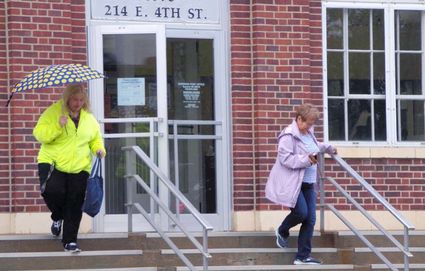 As these pictures show weather on the plains can change quickly. Within the week the National Weather Service expected both new high and low temperature records would be set for this area. The top photos show patrons going to the Superior Post Office on Tuesday morning weather wearing their winter coats. The lower photo shows swimmers were out in fore at the Lovewell Reservoir during the weekend.

When it comes to weather, area residents certainly have something to talk about though our extremes are not as great as they have been in Denver. After having weekend temperatures top the 100 degree mark earlier in the weekend, Denver residents on Monday were under a winter storm watch and preparing for snow. By midday Monday the temperature had reached 93 degrees before nose diving. By 11 p.m. it was 47 degrees. By 8 a.m. Tuesday it was down to 33 degrees.

Denver temperature records have been kept since 1872. That year on Jan. 25 the temperature dropped 66 degrees, a record that has yet t...