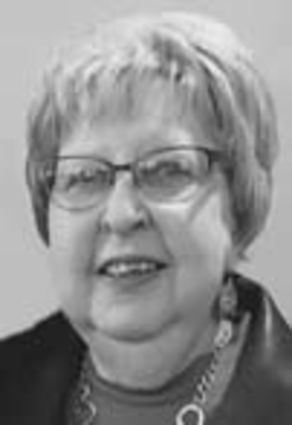 She was raised on the farm north of Hardy, Neb. She graduated from Hardy High School in 1957 and attended the University of Nebraska at Lincoln where she pursued a degree in business. In college she met and married Tom. They quickly started their family. They raised daughter Beth in Lincoln and moved to McAllen, Texas shortly after Beth graduated high school. Bonnie moved back to Nebraska after her husband died in 1997.

She was a bookkeeper and accountant for most of her life. She liked cheering on Husker Football, playing cards, fishing and crossword puzzles. She will be missed dearly.

She is survived by her twin brother, Burley, and his wife Genell, Copas of Beatrice, her daughter Beth Eckles and granddaughter, Mary Beth Pinckney, both of Lincoln, Neb.

She was proceeded in death by her husband, Byron Thomas (Tom) Eckles, and infant son, Charles Hubert Eckles.

Music will be Mozart’s “Requiem,” Somewhere Over The Rainbow” and “Greensleeves.”

Visitation was held on Wednesday from 9 to 4.

Memorials are suggested to go to the American Heart or Lung Associations.

Condolences may be sent to Megrue-Price Funeral Home, 750 N. Commercial, Superior, Neb. 68978 or in care of http://www.pricefuneralhomes.com.

Megrue-Price Funeral Home of Superior, Nebraska was in charge of the arrangements.