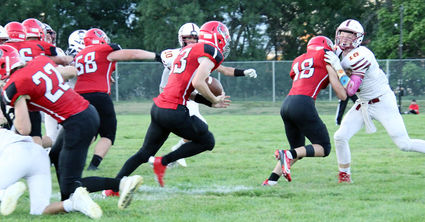 Superior Wildcat Elijah Heusinkvelt (33) breaks through the line because of the good blocking by Ezekiel Meyer (22), Payton Christiancy (58) and Clayton Morris. Superior played at home against Fairbury Jeffs, Friday.

The Fairbury Jeffs football team came to town Friday, but the Superior Wildcats tended to business and won 20 to 0. It was their first win since Coach Paul Heusinkvelt took over.

The team's second and third quarters yielded no points.