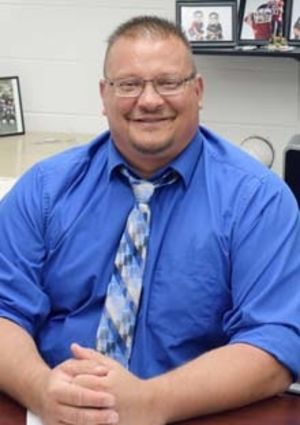 Hailing from a farm by Hardy, Sam Meyers, the principal of Rock Hills Junior-Senior High School has lived in Mankato for almost 20 years. He and his wife, Carie, moved to Mankato because they were looking for a small farm and one came available here. On his farm, Meyers has cows, sheep and goats.

Meyers graduated from Superior High School and Hastings College. When asked what made him choose a career in education, Meyers said, “I love coaching and I knew it would let me stay active in sports.” He also enjoys the teaching part. Meyers said his favorite part of being a principal is helping all of the students in the school, not just the ones in his classes. He also enjoys the interaction he has with the parents.

Meyers is a family man. He and his wife, Carie, have three children: Eve is a senior in high school, Grant is a sophomore and Nate is in eighth grade. His children keep him busy with ball games every night. He also owns two St. Bernards and many farm cats.

Meyers said he is extremely happy he ended up in North Central Kansas. He said, “I can’t imagine living or raising my family in a better place.”