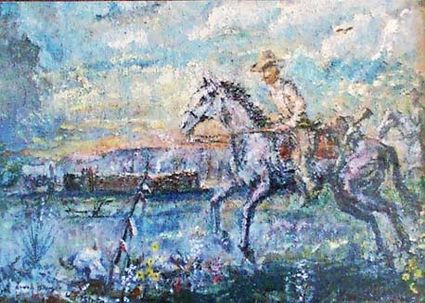 This oil painting entitled "Fort Jewell and Billy Street" was painted for Jewell's Sesquicentennial by Jim Nelson, an area artist. Nelson has lived in Jewell since 1969 but spent summers with his Russell grandparents as a youth. The impressionist painting depicts Fort Jewell, early settler, Billy Street, and Scarbrough Hill. This is one of three items to be auctioned during the Jewell Corn Show. The auction will be at 6:45 p.m. on Saturday, Oct. 10, in front of the Jewell Community Center.

Something new for the 2020 Jewell Corn Show will be an auction. The auction will consist of three items donated to the Jewell Chamber of Commerce in honor of Jewell's Sesquicentennial. Mark Baxa, Jewell High School Class of 1975, will be the auctioneer.

The first item is a clock made by Harold Topliff and donated by Harold and Patsy Topliff. The clock is made of barn wood from the Frank Grennan Barn. It features one of the Jewell Sesquicentennial Car Tags as well as the wood from the Grennan barn. The clock measures about seven inches in height and 22 inches in length.

The second item is an oil painting by the late Bertha Knarr. Knarr was a well-known Jewell area artist and the painting is of a well-known Jewell landmark. The old limestone house that stood for many years on the east side of Highway 14 south of Jewell is the focus of the work.

The painting, measuring approximately 14 inches by 18 inches, was originally owned by the late Kenneth and Rosa Wheat. It was donated to the Jewell's Sesquicentennial by their descendants.

The final item is an oil painting done by Jewell artist, Jim Nelson. Nelson came to Jewell about 1969. He works in various media but much of his displayed work is in oils. The painting he created especially for the Jewell Sesquicentennial is titled "Fort Jewell and Billy Street." It is 35 inches by 45 inches, including the frame. The frame was built by Mac McAtee of Jewell.

Fort Jewell as the subject of the painting was a historically based decision. Fort Jewell was the first construction in what was to become Jewell City. The seven-foot tall, four-foot wide walls protected the 28 men of the "Buffalo Militia" and their families during the threat of hostilities during May and June of 1870. The walls also enclosed the first well dug in Jewell.

There is no known historic depiction of the fort. Nelson's painting is his visualization of the structure. The work has evolved over the course of the last four months. A rider in the foreground highlights Fort Jewell and Billy Street with the orange glow of a sunset. In the background is an iconic Jewell landmark, Scarbrough Hill. 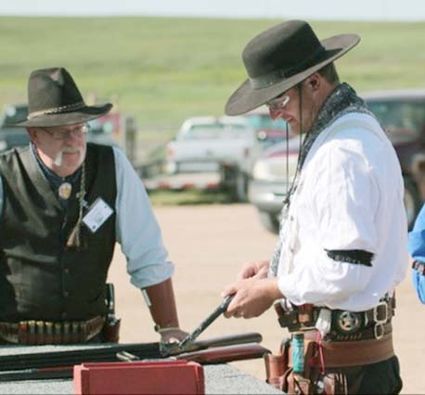 Travis Cady, a Jewell native, loads his weapon as he prepares for a Cowboy Action Shooting event. Cady will demonstrate the sport at the 2020 Jewell Corn Show at 1:30 p.m. on Saturday, Oct. 10.

Nelson aims at being a "good draftsman" and not "niggling a painting to death" overworking it. In completing this painting, he "thought about the scene, not the palette." He used hues that allowed him to "deal with the light from the sky" and the "reflections" from that light to create more of a three-dimensional feel to the painting.

The focal character in the painting, Billy Street, is an early Jewell settler and member of the Fort Jewell Buffalo Militia. Street also is credited with walking from Jewell to Scarbrough Hill and seeing a vast herd of buffalo to the south, west and north. A herd that stretched as far as he could see in the "Buffalo Valley."

The painting thus depicts three iconic Jewell symbols, Fort Jewell, Scarbrough Hill and Billy Street. It, with the Knarr painting and the Topliff clock, will be auctioned at 6:45 p.m., Saturday, Oct. 10, in front of the Jewell Community Center.