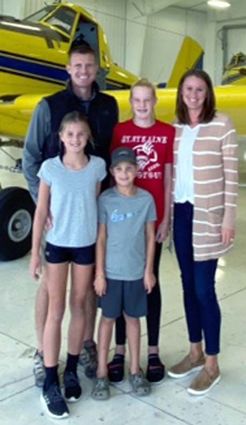 Luke and Natalie Meyers, owners of Meyers Aerial Spraying and the recipients of this yearʼs Entrepreneur of the Year award, are pictured with their children, Reagan, Kylie and Jax.

In 2010, Luke and Natalie Meyers bought Blackstone Aerial Spraying from Barry and Karla Blackstone. What started as a two location, two airplane business, has now grown into one of the state's largest independently owned aerial crop dusting services.