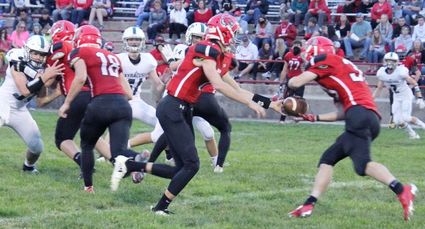 Dane Miller (11), the Superior quarterback, handed off the football to Elijah Heusinkvelt (33) during the Wildcats 21 to 20 loss to Syracuse, at Superior, Friday.

Superior had one win and two losses coming into the Friday night game with Syracuse. Syracuse's record was the same. The final score says that they were two well-matched teams.

First quarter there were no scores for either team.

Zeke Meyer returned a Syracuse fumble for 14 yards. The point after kick attempt was no good. The score ending the second quarter was Superior 6, Syracuse none.

Third quarter, Syracuse scored on a 29 yard pass. Point after kick was good.