A meeting Sunday evening, Oct. 4, in Lawrence could be summed up with four little words:

But then, those four words don't explain much, so we'll use more words to explain what is meant by their use.

* Trepidation . . . Feelings and emotions experienced by a dozen Lawrence Community Building Fund Committee members ranged considerably Sunday evening. The committee met at the Lawrence American Legion Hall for the first time in seven months because of several factors. One being the COVID-19 pandemic, the other being the untimely death of the committee's president, Marlene Faimon.

The unsettling effect of COVID forced cancellation of what was becoming an annual Spring Fund raiser event. Unsure of what course of action to pursue, little was done over those seven months other than a lot of conversations and necessary actions to keep a positive outlook for the future. A future full of uncertainty.

* Surprise . . . The meeting started with a moment of silence in recognition of all the contributions Marlene Faimon made to the committee and to the community through her volunteerism.

Immediately following, Carla Kohmetscher invited Lyle Koh-metscher to the front and unveiled a replica check enlargement for $150,000 made out to the Lawrence Community Center.

Lyle explained the money came from the estate of Linda Ruth Hill, his sister-in-law, who died in 2018. Lyle's deceased wife, Carole, (deceased in 2008) was the sole beneficiary of the Hill estate. Besides the Lawrence Community Center donation, Mr. Kohmetscher distributed the inheritance to a university where Linda Hill taught and several animal welfare organizations that were favored by Linda Hill.

* Excitement . . . After the group absorbed the good news of the $150,000 donation, Carla Kohmetscher updated the group on the current status of the committee's funds. They are as follows: 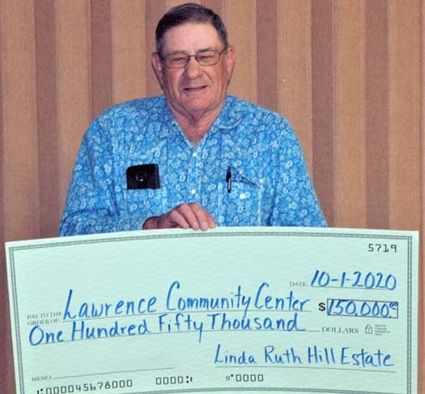 Other than the Lawrence American Legion $35,000 pledge, Lyle Kohmetscher poses above with the largest donation to date to help grow the fund to pay for a new Community Center in Lawrence. It is anticipated by the committee that Lyle's $150,000 donation may be the first of more major donations to come. The work to secure funding continues.

A number of ideas were discussed following the donation announcement. They included: * Since the 2015 Community survey and pledge drive was done, all donations except this current $150,000 and the American Legion pledge came from donations of $10,000 or less indicating the wide support the project has. * COVID cancelled the 2020 Fund Raiser and sure hurt the committee's efforts. * Only $18,500 of the $75,000 Nebraska Tax Credits are left to be used. (Nebraska Income Tax Credit of 40 percent of donation. For example, a $10,000 donation goes to the fund and the donor receives a $4,000 Nebraska Income Tax Credit which he has five years to use.)

* Grants: Several efforts have been tried, but failed. Enough money has now been raised that the building should now qualify for the Nebraska Community and Civic Center Financing Fund Grant which will now be investigated. * A drawing, (that was to be held last Spring with the fundraiser) that was suspended will be continued and the drawing will be held on Thanksgiving Day. (All tickets sold last Spring are automatically entered into the drawing this fall.

* Hopeful . . . maybe the last emotion committee members left with was that of being hopeful. It seemed members ended the evening meeting more excited than they have been for the past seven months. They talked about plans for grant applications; about the possibility of forming a "Challenge Club" encouraging donations of a certain amount (maybe $25,000 or $10,000); other ideas were suggested and as a whole, the committee requested ideas and suggestions from the public to assist in this endeavor. Any questions can be directed to any member of the committee.