Retired college professor writes book about growing up in Bostwick 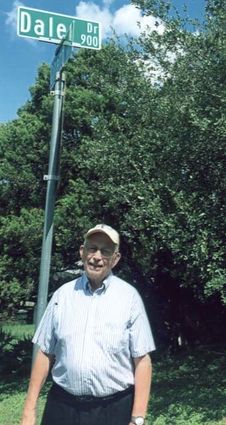 There are 29 places in the world named Clyde. Twenty-four of those are in the United States. A former Bostwick resident named Dale Clyde has as his goal to each year send a Christmas card with a picture of him standing by a sign welcoming visitors to one of those towns. This year he had made arrangements to visit a western state community named Clyde but the pandemic caused a change in his travel plans. Instead he found a Texas community near his home that has streets named Dale and Clyde. And so today readers of The Express are getting a sneak peak at the pictures that will be featured on his 2020 Christmas card.

While the unincorporated Village of Bostwick may be classified among the smaller Nuckolls County communities, the community has inspired at least two books.

When Dale Clyde was in Superior visiting friends and relatives in September, he came from his home in Texas with gifts, copies of his self-published book, "A Boy from Bostwick."

The book is largely the product of the retired chemistry professor. He painted the water color of the former Bostwick elevator which appears on the cover, and drew the line drawings throughout the book. He wrote the book, set the type and did the layout. Now he is doing the marketing, which he thought would primarily be giving copies to family members.

However, when he showed The Express editor a copy, Clyde was persuaded to leave a few copies at the newspaper office to see if area residents might be interested in purchasing copies.

The book includes pencil sketches of places like the house he was born in, the former Bostwick Bank building which also served as the community post office and the home for the postmaster and his family. Among the attributes of the Bostwick Post Office was the former bank vault which doubled as a bedroom.

The author's dad served as the manager of the community's elevator which Clyde called the heartbeat of the town. He compared the elevator to a human body.

He taught chemistry for 25 years at Trinity University and 15 years at a community college.

His father died while the family lived in Bostwick and his mother moved to Superior as did his two siblings, the late Daryl Clyde and Diane Way.

His mother was a Superior resident when she died in 1975, and he has kept her home here. At first he rented it out but since 2000 he has kept it for his personal use when visiting Superior. Over the years, a few friends have also been allowed to stay for short times in the house.

One of its unique features is the coffee table made from the home's former bathtub. When he removed the claw-foot tub to install a shower, he didn't want to throw it away. So he painted the claw feet gold, the tub blue and added a wood top to turn it into a coffee table.

A nephew living in Superior, Steve Clyde, and his nephew's wife, Lori, have helped him maintain and improve the house located in the west central part of Superior.

Clyde said his interest in genealogy motivated him to write the autobiography. He wished his ancestors would have left more letters or diaries as such resources reveal more about their personalities than do the list of dates often found in family trees. He hopes the book he has written will leave a footprint for those who follow him.

The 240-page book is more than just a narrative. It contains more than 100 pages of crossword grids. Each crossword is related to a chapter of the book. Read the chapter, study the clues and the crossword worker should be able to complete the puzzle. Each grid is printed twice. One copy of each grid is perforated so it can be torn out and more easily worked. The book also includes the answers. The puzzles follow the rules established by the New York Times.

The following is a sample of Clyde's writing:

Guide Rock was the closest town for shopping from the farm. Shopping in town was a big Saturday, all day event. Our weekly baths were taken in a metal tub located in the center of the kitchen floor next to the pans of heated water on the kitchen stove. We polished our shoes. My sister and mother placed curlers in their hair. We donned clean clothes. By late afternoon we were ready to climb into the car.

In good weather we traveled the dirt road, also called the "bottom road." My dad often led us in song on the way. If it was raining or snowing, my parents took the northern gravel road. At times the rain was so heavy on the return trip that we had to park the car on the highway and walk up the muddy drive to the house. We left heavier bags in the car until the next day. We walked barefooted in the mud, carrying our shoes, socks and umbrellas. I can still feel the cool mud oozing between my toes. 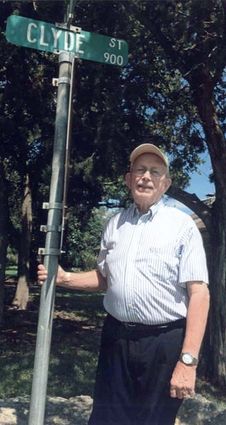 During the months the pullets were laying and the cows were fresh, my mother took cream and eggs to the creamery. Payment for the produce helped to buy groceries. The town was busy on Saturdays. Families gathered on the sidewalk lining the main street. It was the time to exchange news about the surrounding area. Men gathered in the pool hall and the taverns. Children ran up and down the street. Pinball machines in the restaurants were popular with the teenagers. Later in the evening, after many people had gone home, a few women sat together in cars to talk and to watch the remaining people on the street while their husbands were still in the tavern. My mother was one of them.

Traveling to town was as far as we ever went. One time my dad drove 10 miles out of the way into Kansas so that we could say we had been to another state---those far away places.