The Sesquicentennial Buffalo arrive in Jewell 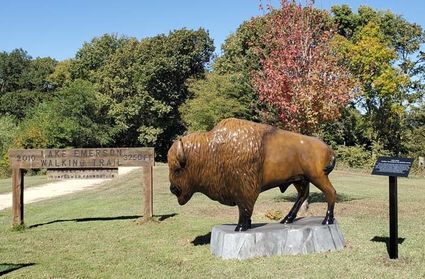 This is one of four Buffalo fiberglass statues installed last week in Jewell. Purchased with a Dane G Hansen grant in honor of Jewell's Sesquicentennial, This statue stands near the north side of Lake Emerson.

Four buffalo, purchased in honor of Jewell's Sesquicentennial with a Dane G. Hansen grant, have been installed! The fiberglass statues arrived last Tuesday from Seward, Nebraska. Produced by Fiberglass Animals and Objects, the buffalo are six-foot tall and eight-foot long.

Purists might be concerned that the animals are not actually buffalo but bison. True, but also true are these facts: Jewell is in the Buffalo Valley; East, Middle and West Buffalo creeks flow near the townsite; Jewell is located in Buffalo Township and Buffalo Street is one of the east-west streets in Jewell. Further, Billy Street reported the view in 1869 from Scarbrough Hill was "one mass of moving buffalo."

In fact, the plaques installed in Maag Park and at Lake Emerson recall the Street Story with these words quoted from Palmer's The Old Home Town: "In 1869, W. M. "Billy" Street came here to locate, he climbed Scarbrough hill west of the present site of Jewell City and took a view of the country. As far as the eye could reach, north, west, south, was one mass of moving buffalo. The main herd was on the move."

Buffalo committee members responsible for developing the idea and writing the grant were Shelby Bohnert, Deb Bohnert and Gaye Daniels. Becky Loomis assisted with developing the Maag Park site for the statue. Damon Bohnert, Darrell Bohnert and Dan Daniels helped Patrick Keough from Seward with the installation. Keough commented "this is one of the closest places" he has delivered objects.

The Maag Park statue will be the site of a 10 a.m. dedication ceremony Saturday right before the Corn Show Parade. The public is welcome to attend the ceremony.