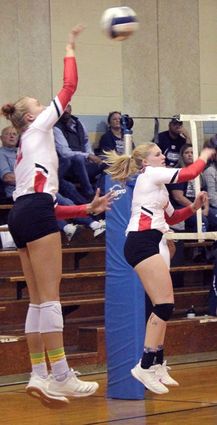 Shayla Meyer (12), Superior, sends the ball back across the net as Emma Henderson (11) looks on. The Superior Wildcats won the Bluehawks volleyball tournament, Thursday, at Hastings Saint Cecilia.

The Lady Cats came out strong against Wood River and beat them in the first set 25-4. The second set was a tougher match. The Cats hit a few key balls out of bounds and made some defensive mistakes. Wood River also had some very aggressive cross court shots that the Wildcats could not stop. In the third set, right side hitters moved their block in toward the middle of the court and along with their middle blockers , Alexa Cox and Cailyn Barry, they were able to shut down the outside attack. Sadie Rempel had two aces and Ella Gardner, five aces...