History played out in Jewell 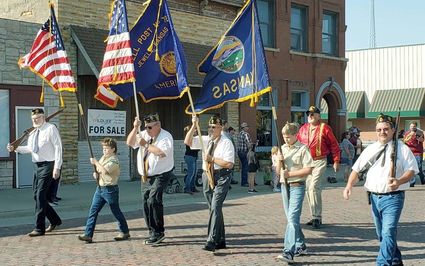 The Sesquicentennial Corn Show Program is in the books! The program highlighted Jewell's early history and the sacrifices of Jewell's men serving in the armed forces of the United States.

Historical characters were Rev. H. G. Breed, early day Jewell preacher portrayed by Bob Freeman. Lola Abram, was the song leader for the segment on the churches of Jewell.

Joe Eilert had the role of William "Billy" Street who was the captain of Fort Jewell's Buffalo Millitiamen. Nathan Saint took on the role of James A. Scarbrough, for whom Scarbrough Hill was named.

The four historical women portrayed were the grand marshals for the Corn Show Parade. Annie Jones Billings the first white woman in Jewell was portrayed by Debbie LaCoe Abram. Her sister, Virginia "Jennie" Jones was played by the youngest member of the cast, Avery Loomis."Aunt Sally" Thackston, a popular person in early Jewell history, was played by Cindy Traump. Patricia Oplinger Zentz portrayed her Great-Great-Great Aunt Lydia Jane Matter Cameron, a 1873 bride in Jewell. Finally, Marsha Willmeth Bartsch was Callie Debus Spielman. Callie is remembered by many as the owner and operator of Callie's Dry Goods.

Ron McMillian portrayed his grandfather, Henry Boogaart. Boogaart was part of the Boogaart Family grocery store business. The Irishman, Patrick Fay, was portrayed by Irishman, Mike Nulty. Fay's farm is now the home of Jason and Billi Arasmith. His tombstone, in the Jewell Cemetery, faces south toward his farm.

Another well-known businessman, J. D. Robertson, was played by Dan Daniels. Robertson had the biggest and most well-stocked business in Jewell County.

Daniels, along with Jim Rice and Steve Bartsch were the technical crew. They utilized the new monitors now in the community center. The monitors are part of the Miola Griffeth memorial.

The program was not all seriousness. The Sesquicentennial Dancers were a highlight. Nina Williams and Roger Nonhoff, in period costume, danced the Charleston. Jada Eilert, Avery and Ashlyn Loomis did the Macarena. Terry Moyer and Becky Moyer Cockroft showed they still could do the Twist!

The final portion of the program honored the sacrifices made by law enforcement and the Armed Forces of the United States. That section of the program began with Curtis Saint in the role of James "Frank" Harrington. Harrington was the 1885 Jewell City marshal who was mortally wounded attempting to arrest a horse thief.

Readers, Jason Arasmith, Josh Burks and Robin Griffeth read the names of all Jewell Countians who have given their lives in the service of their country. All from Jewell were recognized by name and photo. The historical research for honoring the service men was done by Steve Bartsch.

The flutist for the evening was Kris Divel of Lincoln, Neb. She played "Yankee Doodle" to begin the segment and "Taps" to conclude it. Matthew Rice brought in the United States flag, led the Pledge of Allegiance and retired the colors.

The program concluded with Lola Abram, song leader, leading the cast and audience in "God Be With You Till We Meet Again."

The BBQ after the parade served 600 and ran out of buns, forks, napkins, chips and cupcakes – they got bread as they didn't run out of meat. 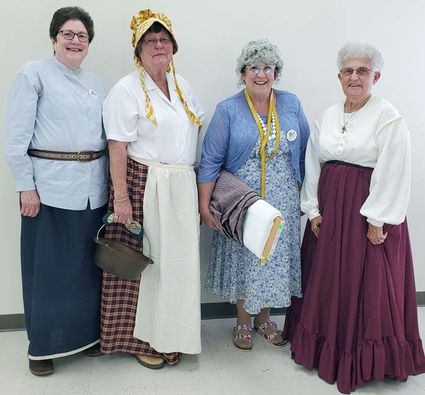