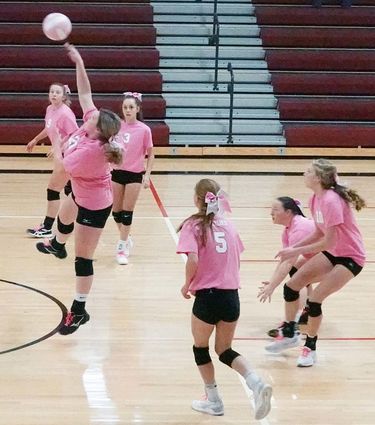 The Rock Hills High School volleyball team improved their season record to 10-11 with their four-set, 25-8, 25-27, 25-15 and 25-16, match win at Natoma last Tuesday. The Grizzlies visited Osborne, Tuesday, for a triangular match with Chase being the third team competing. Match results were unavailable at press time.

Daleton Groote was the top killer for Rock Hills against Natoma with four. Jauclyn Lemke had three kills. Raylynn Anderes hit the net for two kills.

Lemke cleaned up with 10 digs. Davis and D. Groote finished up with seven digs each. Frost bumped up six digs. Grace Ayers came away with five digs. Dunstan picked up three digs. Anderes, A. Groote and Selena Luong accounted for two digs each. Brown had one dig.

The Northern Plains League Tournament is being played Saturday. The Grizzlies, seeded sixth in the 12 team field, will open play at 9:30 a.m., against Thunder Ridge at Lincoln High School in Lincoln. They will then play Lakeside. They finish up the round against Southern Cloud. Their progress in the championship round will depend upon the outcome of their earlier games. Thunder Ridge is the third seed. Lakeside is the number two seed while Southern Cloud is the seventh seed.