Good Samaritan staff participates in 'Pie in the Face' Contest 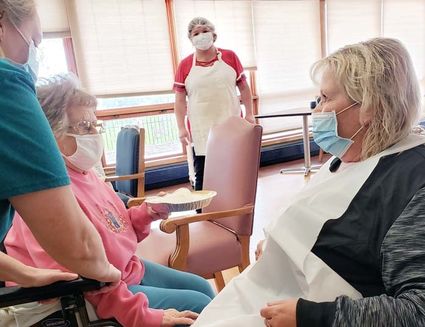 Sandy Lintz, director of nursing, waits to get a pie in the face by resident Phillis Giger."A Pie In The Face" contest was held at Good Samaritan Society Superior, Friday.

A "Pie In The Face" contest was held Friday at Good Samaritan Society's Superior Center. Nine glass jars with a department supervisor's name on each were used. Money was donated by staff in the jars of the person they wanted to see get a pie in the face. The jars were available for staff for one week. The top three money makers were going to receive a pie in the face. Top winner, or loser, was Missie Wilt, Wilde Ridge Estates manager. Second winner was JR Moss, administrator. And the third place winner was Sandy Lintz, director of nursing.

Three residents were chosen to throw the pie...