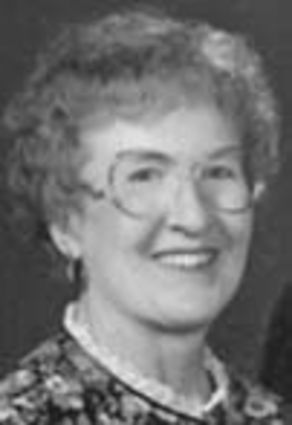 Barbara (Schroeder) Johnson died April 11, 2020, at the age of 92 while residing at Presbyterian Manor in Salina.

Barb was born March 3, 1928, at the home of her maternal grandmother in Trum- bull, Neb.  She was the daughter of Kenneth Black and Doris Perry Black. Her early years were growing up in the Trumbull area. The family later moved to Caldwell, Idaho.  She attended school in Caldwell and received an associate degree in education.

In June of 1948, Barb married Stanley Schroeder, a young veterinarian. They resided in Imperial, Neb., for many years.  They had four daughters and one young son,Scott, who died at the age of 2.

Following her divorce from Stan, Barb went back to college at the University of Nebraska in Lincoln. She completed her degree in elementary education. She worked during the school year in Imperial as an educational assistant. Upon graduation, she took a teaching job in Superior, at the elementary school. She married Vernon Johnson in January of 1984.

Next to family, she enjoyed time with friends. In Imperial, she was in Sewing Club, which was a group of moms who met regularly to support each other and have fun.  Barb liked it when friends would drop by for a cup of coffee and a chat.  During her daughters’ younger years, she patiently helped with many 4-H projects, club meetings and county fair exhibits.  She was also very supportive of her daughters’ friends finding a way to make a meal stretch to feed as many as needed and making sure there were plenty of ingredients for making cookies. In Superior, she and Vernon enjoyed playing golf, frequent trips to Lindsborg, gardening and Bird Watchers’ Club.  They were active members of the Presbyterian Church.

Barb had a huge passion for music.  She sang in church choirs in Imperial and Superior, directed Junior Choir and entertained at various venues with the Farmerettes singing group in Superior. She was also a founding member of POM POMS (Promoters of Music) and made sure her daughters learned to enjoy and appreciate music. Whenever she heard music, she would sing along – choosing to sing harmony. Her last breath came while listening to “Amazing Grace.”

Her services will take place at a later date in both Imperial and Superior. Announcements will be made in local newspapers.

In lieu of flowers, memorials are requested to be given in Barbara’s name to either the Imperial Community Foundation or The Alzheimer’s Association. Please send checks to Mary Siegler, 1355-D Bear Mountain Drive, Boulder, Colo. 80305.