Krayton Kucera, Lawrence-Nelson quarterback, (center with ball) changes his mind about running when confronted by two Bruning-Davenport-Shickley defenders and is about to toss the ball to Tyson Kotinek (26). Keith Miller is in front of Tyson to block. On the side are Trevor Biltoft (15), Blake Wroughton (80) and Konnor Thompson (56).

Good or bad, every sport season has its own history.

The 2020 L-N Raider football history will go into the book with a record of one win and six losses. However, the team, coaches and fans know "the rest of the story."

A short summary of the year: • The year started with high expectations and there were good reasons for them. • Winning first game of season. • Injuries began in game No. 2 and the loss was influenced by them. • Injuries increased and the COVID virus forced the cancellation of one game and saw a team of only freshmen and sophomores rise to help rebuild the Raider Pride in the next game. • One game with the head coach sitting high in the bleachers because of the COVID. • The end of the season saw the Raider Pride tested by the class D-2 No. 1 and No. 2 rated teams in the state giving a good account of themselves in spite of being outmanned.

Coach Blevins noted: "It's been a rough year with injuries.  I personally believe this is largely due to a non-typical off-season. I have continued to be proud of the boys.  Even though not much has gone right for them, they continue to show up every day and play hard."

Back to a summary of the final game against No. 1 rated Bruning-Davenport-Shickley (BDS). The game was the annual 'Parent's Night'-Pink Night game for the year.

Quarter No.1: L-N kicked to start the game and the BDS return of that kick covered 77 yards and resulted in a BDS touchdown. However, much to the surprise of the BDS team, the Raiders did not crumble. On their first possession L-N put together a seven play drive that saw Tyson Kotinek run for 14 yards and catch a 38 yard pass. With a 3 and 9 situation on the BDS 14 yard line, QB Kucera connected with Cole Troudt for a 14 yard TD pass. The PAT failed and the score was 6-8.

BDS scored on their other two possessions of this period and the Raiders had a ten play series, but netted little yardage. Score: 6-22.

Quarter No. 2: The Raiders took almost six minutes off the clock early in this period and scored on the running of senior running back Keith Miller. Keith ran the ball eight of nine attempts, but then switched to a pass receiver for the final play of the drive catching an 18 yard pass from Kucera. The PAT failed, but with 6:34 left in the period, L-N had two TDs and BDS had three TDs; score 12-22.

BDS scored on all three possessions in this quarter. L-N could not dent the huge BDS defensive line for the rest of the period. Half time score: 12-46.

Quarter No. 3: BDS kicked and L-N used ten plays and two big penalties against BDS to move the ball to the BDS 26 yard line where the drive fizzled. BDS scored on their next possession for their final points of the game.

The Raiders converted on their next possession on runs by Miller, Tyson Kotinek and Kucera. L-N covered 52 yards in seven plays scoring with 2:14 on the clock on a six yard Keith Miller run. The PAT kick was blocked. Score 18-52.

Quarter No. 4: BDS drained almost nine minutes off the clock over the end of the 3rd period and start of the 4th, but the Raider defense stopped them on the two yard line. L-N started a drive of their own, but were stopped when a fumble was recovered by a BDS player and BDS ran out the clock.

Statistics are sometimes interesting as some are in this game. Specifically, first downs and fumbles are identical and the Raiders played the game with only one penalty. 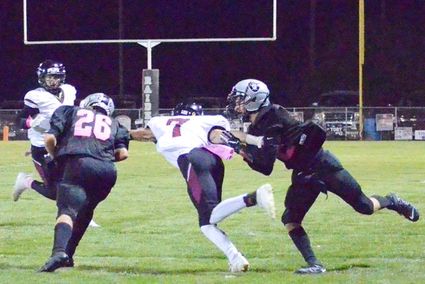 The goal post is in plain sight, but it is far away as Tyson Kotinek attempts to go that way. A teammate attempts to block for him.

The 2020 season will go down in history as the COVID and injury year in addition to playing four teams that qualified for the state playoffs this season. Ending their years as high school football players are 10 seniors. They include: Conner Cannaday, Blake Janda, Cole Troudt, Trevor Biltoft, Diego Wolfe, Darren Kathman, Peyton Mazour (incurred new injuries almost every year), Keith Miller, Konnor Thompson and Blake Wroughton. We thank them for the work they put in and wish them the best in years to come.