Friendly conversations at Hair and More 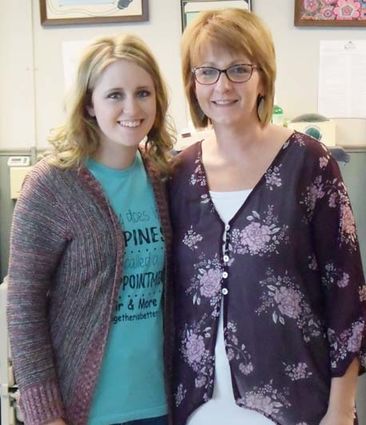 Haley and Pam Hair and More

Pam Dunstan and Haley Nelson, the hair stylists at Hair and More in Mankato, are willing to have some friendly conversation with you as they style your hair. Dunstan and Nelson met when Nelson would come into the salon with her grandma.

In her free time, Nelson enjoys photography and farming. Dunstan enjoys quilting, mosaic and time with her children and grandchildren.

Nelson owns a dog named Ruger while Dunstan doesn't have any pets.

Dunstan's past work experience includes a grocery store (Boogaarts), the movie theater, Sweden Creme and a dentist's office. She then became part of the hair styling community. Nelson, however, has only worked as a hair stylist.

Nelson and Dunstan both enjoy living and working in Mankato because they can know all of their people, who feel more like family than clients.

COVID has caused a lot of inconveniences to their business. They had to close for eight weeks. They never know if or when they might be out of work again. Dunstan and Nelson now have to wear masks and sanitize their stations more often than they used to.

Before the business moved to its current location, there was only enough space for one stylist and one client at a time.That was the inspiration for Hair and More to relocate. Now they have the needed chair space for two operators.

Dunstan has been at Hair and More for 32 1/2 years, while Nelson has been there for six years. Dunstan and Nelson are co-owners of the salon.

The two are proud they have been the chosen salon by multiple generations of the same family. In the past, they used to have four generations of clients at the same time.

Hair and More is more than just a salon. They offer brushes, earrings, shampoos, conditioners and friendly conversation.

"Thank you for all of the support shown by clients and community by deeming us 'essential' after being shut down by COVID-19," Dunstan said. "The kind people here are what makes Jewell County a great place to live and raise a family."